The New Year seems like it should be a time of year when people can slow down and take stock. This year, it seems like there is no slowing. The world continues to erode before our eyes and instead of finding a sense of peace, the need to fight and rage is a bag that must be carried over from that bitch of 2016.

I realize it isn’t fruitful to don a complete Pollyanna vibe; by putting blinders on and cross my fingers and just hope things don’t get too bad. But I can’t live a life filled with worry. It does shitty things for my sleep and taking care of myself and my family. So I continue to try for a fine balance.

There are some awesome people out there offering up great ideas on how to cope. I could list them, but honestly, I’m not in the mood for that today. My favorite bit of advice to date, however, comes from Chuck Wendig over at Terribleminds. He suggested as writers, we “write…despite”.  No matter what.

It’s simple, elegant, and helpful for my state of mind lately.

However, one thing was business as usual in my little corner of the world. Sunday, January 1, 2017 seemed like a great day to go jump in a lake! 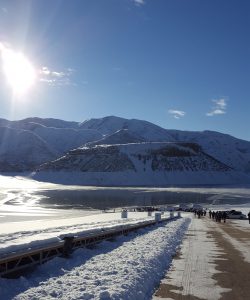 Last year, I braved the cold weather in a bathing suit and joined a handful of folks as crazy as myself as we immersed ourselves in the cold waters of Lucky Peak Lake.

This year, I signed up to take place in the 14th annual, Great Polar Bear Challenge.

After a late night, I woke to a cool crisp winter’s morn. My dear friend Michele, who talked me into this mess last year, and who is my support in this endeavor, picked me up.

Bleary eyed and drowning in coffee, we drove from Boise east toward Lucky Peak lake. It’s about a 25 minute drive to the boat dock where the plunge takes place. Plenty of time to appreciate the low clouds hugging snow drenched foothills; the sun attempting to break through the clouds. and the snow packs that were built up along the road. As we drove past a stretch of the Boise River, steam danced into the air. A result of the sunshine, the 30 degree water meeting the -4 degree air. I shivered and laughed.  What the hell am I about to do? 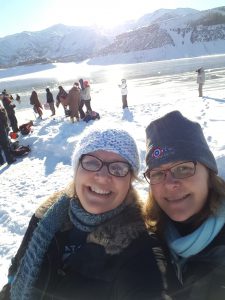 We arrived about 45 minutes before the big plunge. It’s a long walk from the parking area to the actual shore of the lake. A long walk down, down, down to where volunteers have tents set up. Did I mention this whole experience is to support the Make-a-Wish foundation?

(Because let’s be honest, if jumping in a freezing cold lake wasn’t for a good cause then the group of people gathered together are just a bunch of crazy idiots.)

One of the local radio stations was piping in music to pump up the crowd.

After singing in, I was given my t-shirt I had earned by raising money for this good cause. The long sleeve shirt is orange this year. People will be able to see my accomplishment from a mile away! 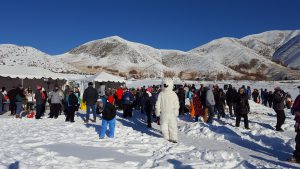 Coffee and donuts had been donated, but I wasn’t here for the food. I’m here to get down to business.

We had a mild winter last year, don’t get me wrong, cold is still cold. But this year, with the amount of snow we’ve had along with the melting and freezing, the lake had a nice sheen of ice. About seven inches of ice built up along the shore, and three inches where the extreme dive and rescue team was breaking it up. 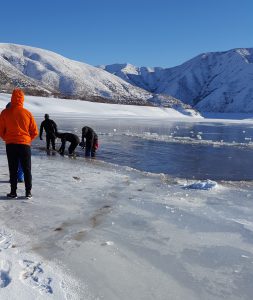 (Three guys stood on the edge of a piece of ice, then they jumped together, about three or four times and the ice broke. That’s how thick the ice was.)

Finally, it was explained that since the ice closest to the shore couldn’t be broken, we’d do things differently this year. Instead of the ‘don’t think, just run’ exercise I took part in last year; this year, there was going to be a lot of thinking. 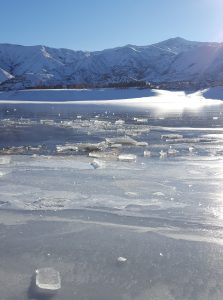 First of all, there wasn’t a lot of room made in the iced water, so we couldn’t all go at once. Instead, in groups, we’d have to step down gently from a ledge of ice into the cold water, walk out a bit and dunk ourselves, if we were inclined, and then turn and slowly make our way back to the edge where someone would be waiting to help us out of the water.

The countdown was on, thirty seconds.

I began to take off my many layers of clothes and put on my water shoes as the roared countdown continued.

Nine, eight, seven, six….a collective Barbaric Yawlp rose up into the crisp air when the time came. People began to move, I wiggled some space into a line of people, and the next thing I knew, my feet were in the water. Last year I don’t remember much, the whole process was so fast. This year, the experience was too methodical. Too slow.

When I could, I dunked myself under. (Full immersion makes this whole experience viable in my book.) My breath was caught in my chest then, the cold was like knives but I had time for one thought: This whole thing, this whole exercise was a cognizant action, a true baptism in order to wash away 2016 and welcome a New Year.

Drenched, I turned and walked back to shore, waiting far too long in the water for my turn to get out.

I found my support team of a friend and donned my towel and blanket.

The whole of the experience can be easily wrapped up in one phrase.

Holy Shit that was cold!

In all honestly, I could handle most every part of being cold. Except the cold in my toes that begins to ache. I switched from my water shoes back into the heavy duty Sorel boots and snapped a few pictures. Then we were off. Headed back to the car by hiking up, up, up. It was the only thing last year that had warmed us up. This year, the exertion worked as intended.

Will I attempt this madness next year? Probably. Most likely. Look, I get that this isn’t everyone’s cup of tea. I know it’s lunacy.  Most people think I’m nuts and crazy. Perhaps I am. Though, I think it’s telling that most of the declarations of my craziness are quickly followed by sentiments of ‘you go girl.’

There is a hopeful cleansing to the whole of the experiences, and this year, it seems I needed it more than I had thought.