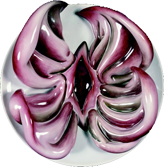 *Note: I won’t apologize for my language, but I’ll give you a heads up. Language here get’s spicy.

My hope. My soul. My passion. They are all mixed together in my love of prose and poetry. In literature. In lovely groupings of words. And in language.

As a writer I think about language quite often. How it can be simply functional. “I see a tree. Do you see?”

It can be lyrical. “I walked back to my room and collapsed on the bottom bunk, thinking that if people were rain, I was drizzle and she was a hurricane.” John Green Looking for Alaska.

It can be playful. “At least once a fortnight a corps of caterers came down with several hundred feet of canvas and enough colored lights to make a Christmas tree of Gatsby’s enormous garden.” -F. Scott Fitzgerald.

It can be memorable. “It was the best of times, it was the worst of times.” – A Tale of Two Cities.

And of course language can be moving, “We cross our bridges as we come to them and burn them behind us, with nothing to show for our progress except a memory of the smell of smoke, and the presumption that once our eyes watered.”
—Tom Stoppard, Rosencratz and Guildenstern Are Dead.

And language can be rebellious.

Good lord, language can be a form of rebellion.

These past few days; from the Women’s March to the newly acquired 350,000+ new ACLU members who raised about $25 million dollars in one weekend…I’ve got some ideas wandering around my insides. To talk about these ideas, I need to first talk about my hero, Madeleine L’Engle.

In her memoir A Circle of Quite, she wrote about an argument she had with her husband when the world was on the ‘God is Dead’ bandwagon. Her husband went one further and said not only is God dead, but so is Language. She replied, “If language is to be revived or, like the phoenix, born of its own ashes, then violence must be done to it.” (I’ve talked about this quote before.)

Ms. L’ Engle went on to say that “To do violence to language…is not to use long words, or strange orders of words, or even to do anything unusual at all with the words in which we attempt to communicate. It means really speaking to each other, destroying platitudes and jargon and all the safe cushions of small talk with which we insulate ourselves; not being afraid to talk about the things we don’t talk about, the ultimate things that really matter. It means turning again to the words that affirm meaning, reason, unity, that teach responsibility rather than selfish love. And sometimes, doing violence to language means not using it at all, not being afraid of being silent together, of being silent alone. Then, through the thunderous silence, we may be able to hear a still, small voice, and words will be born anew.”

God I love that woman. Hallelujah!

Okay, the Woman’s March. If you went, if you wanted to go, you know what it was about.

If you didn’t, and perhaps you are one of the people who were upset because you thought it was an Anit-Trump rally or a Pro-Murder rally or a group of ‘snowflakes’ who couldn’t accept losing…(I heard the March called all of those and a few more.)  I want to share this with you. The March was more powerful than Trump, and more merciful than murderous. It was about the current state of our Nation. We are torn asunder and hurting. And we’ve decided to DO SOMETHING about it. To try and see each other regardless of our party, faith, skin color, tax bracket, and sexual orientation. We came together to celebrate our differences and our unifying goal of bettering our homes, our communities, our world. And in the midst of the DOING, some amazing actions and reactions are weaving their hopeful way into our lives for the better.

For me, I found the truth in Ms. L’Engle’s idea that in order to take back a language, violence must be done.  And I found a rebellion among the ashes.

There was a grassroots phenomenon that began before the Women’s March. The Pussy Hat Project. The idea was to “provide the people of the Women’s March on Washington D.C. a means to make a unique collective visual statement which will help activist be better heard.” So it was, a sea of pink pussy hats could be seen around the world January 21st.

(Did you do get a little uncomfortable there? Shift in your seat a bit at the word?)

I did at first too. I commented to a friend that I would have liked a pussy hat. Even as I said it, a lingering uncomfortable teenage goofiness pushed at my gut. (pussy.)

Rather quickly, however.  That reaction was replaced by something else, a sense of awe, maybe. Protest signs ran the gamut of worries and resistance, but one word was plentiful: Pussy. 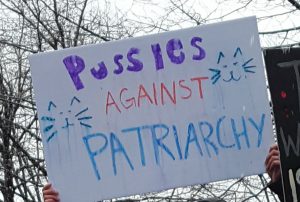 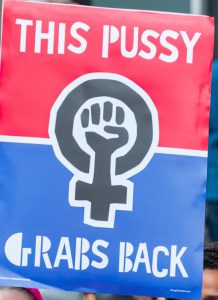 Something was happening that day. It wasn’t quite tangible just yet, but something was there. Then I saw this sign: “I’d call him a Cunt but he lacks both the depth and the warmth.” 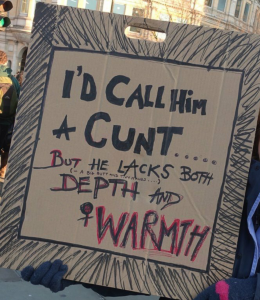 And a week after the march I was called a Bitch.

And I was surprised when my reaction was a smile.

And then my smile turned into a full tooth grin.

And I meant it.

Because you see, the March, this past week, we as women, perhaps without knowing it, we as a collective of women have done violence to the language; violence to the words that were supposed to be a form of degradation. And these words have been born anew from the ashes. Taken back. Torn out of the hands of insecure, scared people who used them to keep us oppressed and ashamed.

The strength of a pussy. The compassion of a cunt. The fearlessness of a bitch. This is my bold rebellion. This is my revolt. 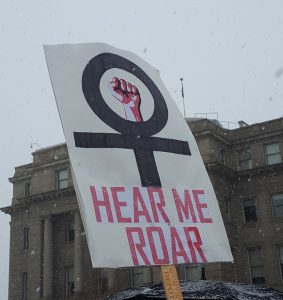