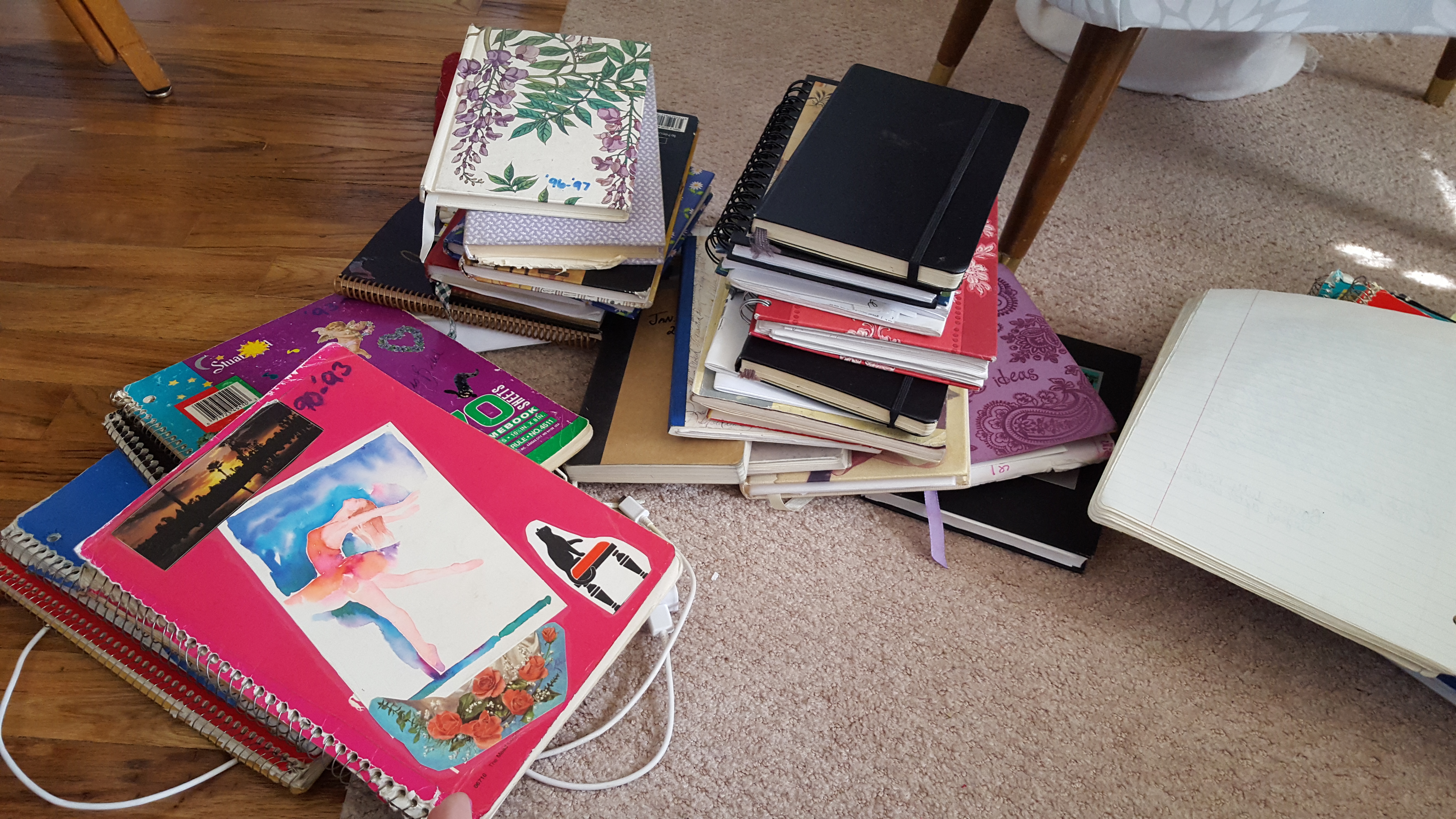 I have found that if you are going to call yourself a writer, you need to do the work. No matter what. No matter the circumstances, no matter your schedule, no matter how you’re feeling, you have to write. All the time. Whenever you get a chance.

So I write, and sometimes it’s not easy.  I thought I would share my process with you,  more or less. Some days it’s more, some days it’s less.

It goes like this. I wake up early, at least an hour before the rest of the house gets up; tiptoe downstairs and make my coffee. And by coffee, I do mean I use a stove top espresso maker and then heat up some milk to make a cappuccino. I shuffle along and open all the blinds, then I arrange my laptop just so in order to be ready to write. Different times of the year find me in different locations.

Coffee made, seat taken, I check email, bank account, Instagram and the dreaded bookface. After several sips of coffee, I demand of myself, “You are wasting time, this is it, all you get. You gotta write now because soon everyone will be awake and this little spell of free time will be broken.”

I open my most recent work and read the last page I wrote, make changes, and then remember that I wanted to defrost the chicken for dinner tonight. So I go take that out of the freezer.

Small detour finished it’s back to the writing.

I make several small changes and then it’s forward.

My current characters are in a train station in Paris and they need to go south. Fast.

How fast do those trains go? I pull up ye old interwebs and search how to get from Paris to Montélimar, (a small medieval town in southern France known for their almond nugget candy. But that’s not why my characters are going there.)

Ah, here it is. I find the train schedule and find that the fast train goes 187mph and will get my characters to their destination in three hours. Excellent!

Back at the train station with them, they are running late and they have no idea what they are looking for as far as the signage goes. Neither do I. I was in Paris eleven years ago, but my tour group didn’t take a train. And the only other movie I’ve seen set in a Paris train station that comes to mind is French Kiss. God I loved that movie. Whatever happened to Meg Ryan? She was the romantic comedy icon for a long time then. Didn’t she marry John Cougar Mellencamp? But didn’t they get divorced? I bet the train station has changed since that movie. So, okay, I’ll keep it generic. They run late and get on a train, that’s fine. We can use supposition or figure it out in editing later.

Flip back to the interwebs, search for videos of people traveling from the main Train station in Paris. 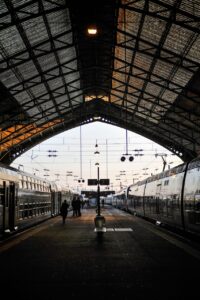 God, looking at these videos and pictures remind me of the trip I took to Italy when my sister got married. Twelve of us went from Florence to Rome for the day on a fast train, it took us an hour to get there. Or was it an hour and forty five minutes? Hmmm. 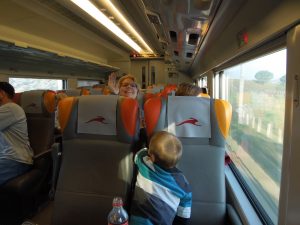 I’ll look that up to. What was the name of the train line we used? Had a picture of a rabbit. Ah, here.  The train line was called Italo and it took an hour and half. That was a good trip, I should look at the pictures and videos for that, might spark some descriptive ideas.

Okay. No time for memory lane. Get back to the business of writing.

“They passed through the backbone of the city, the tracks tucked down alleyways and side streets, giving the view of the dust and underbelly of a European city.”

Uh oh, the kid is awake. Quick break for that and then fifteen minutes later…back to the writing.

The kid is watching a show and finishing waking up, that should give me thirty solid minutes to write. Okay, twenty if I’m lucky.

A train in Paris. No, a little further. Hmmm. What needs to happen here, is it just transportation or should this be a big moment of self-discovery among characters?

Okay, turns out I had ten minutes. Breakfast time.

A quick thanks to the gods for the invention of cereal.

Back to the keyboard!

Did I ever send that email to that gal who asked for those book recommendations? Hmm, better do that while I’m thinking about it. NO, don’t! That’s later stuff, writing is now stuff!

Right, Paris, characters on a train. Talk about scenery. Damn, can’t remember what the French country side looks like.

“Mom, what are you watching?” a little voice wafts over me.

“Videos of a train ride through the French Country side.”

“Because. What do you need?”

“My cereal is all gone.”

I glance at the clock: 8:30 AM. But it’s Saturday. How badly do I want a bit of free time to myself to write?

*Crack of fingers, ready to get serious about this now. 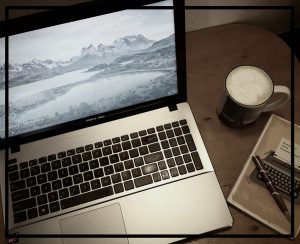 “The gray sky that had been a companion in Paris the past few days was breaking apart, rays of sunshine drifting down onto the countryside as if this was a front row seat for the very moment that summer bowed gracefully to the coming autumn.”

I’m not going to answer it, whoever it is can wait.

*Fifteen minute conversation with my sister; done. Back to ye old awesomeness of writing.

The words come fast now, a lovely rhythm is settling in. My fingers fly across the keyboard, I have direction, I can feel that abyss that can sometimes pull me under so I’m cradled in a cocoon of my words and this book I’m writing lately has me inspired, as long as I give into the momentum, it’s bound to chug right along.

The gentle hum and rocking of the train soothes my characters into their own exhausted thoughts.

“Fly! Fly little unicorn dragon, the night is upon us.”

*That can’t be right.

The French countryside has opened up before my characters and “This is your punishment, no one will save you from the pumpkin prison!”

I stop my fingers and shake off the world I was immersed only to find the kid writing a story next to me. A dragon, a unicorn and a raptor dinosaur have been selected from their various hiding spots among the toys and are precariously placed on top of a small pumpkin.

“The unicorn is under and evil spell of the Dragon and was brought to the pumpkin island but Blue (the raptor from Jurassic Park) is going to save her. ” 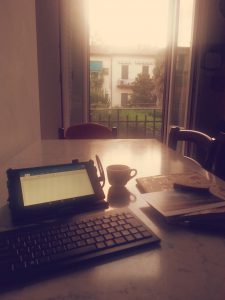 I look at the clock, it’s almost time for Karate. “Almost.” I try to type another sentence, but then the requests for more food, for help getting paints down, are joined with requests from the other member of our small household who has decided that now would be a great time to ask me random questions about bills, cars, and dinner plans with friends.

I laugh, write a last sentence, punctuate it and close my laptop. The morning portion of my writing time has come to an end.