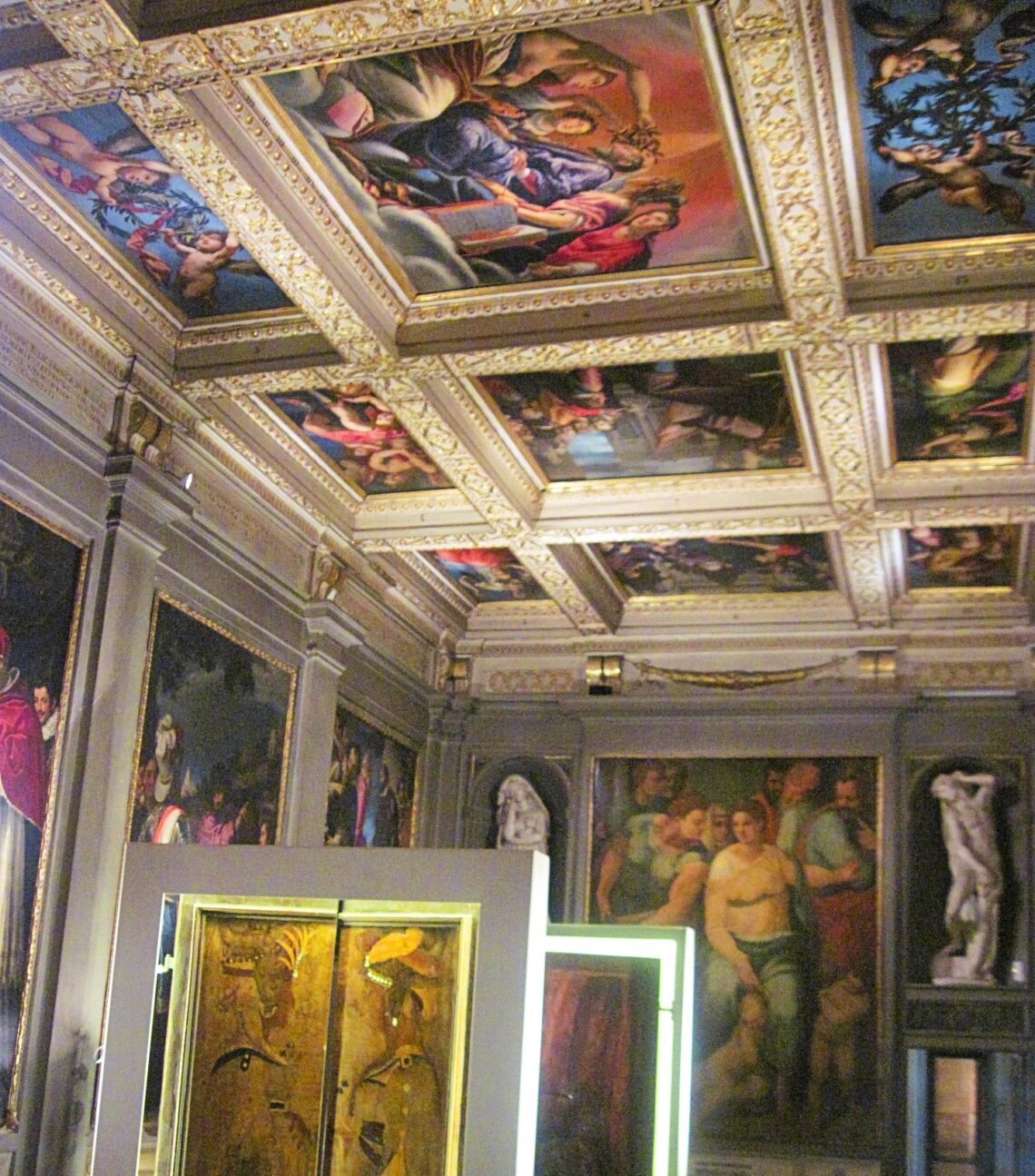 After reading my book, Big Trouble in Little Italy, my aunt called me with this question: “Is there really a museum in Florence that has Michelangelo’s shoes on display?”

The museum is called the Casa Buonarroti.

Okay, I’ve got a few things I wanted to say on this topic, so hold on tight.

He was Michelangelo di Lodovico Buonarroti Simoni. But our dude got so famous folks just called him Michelangelo. Like Cher, but way before Cher.

People during the Renaissance, especially painters who were trying to make names for themselves, did not come from money, so they weren’t very well known. And at this time, when you didn’t have a ‘name’, folks referred to you by the place you came from.

For example: Leonardo da Vinci. His name meant – Leo, that kid from Vinici. (So just a heads up, when we refer to him as ‘da vinci’, we’re actually saying ‘from Vinci’. But it’s really semantics, because that’s how people refer to Leonardo now. Just know, in case he comes back from the dead, to call him Leonardo. And then call an exorcist.)

Now Michelangelo’s folks, well they had money. Which means our boy already had a ‘name’ when he came to study art in Florence.

Simoni is akin to another family name, the kind that is for birth certificates and impressing other people only. Which means that in the school yard, our man would have simply been called: “Michelangelo Buonarroti.”

But his home town was NOT popular for the caprese salad we all know and enjoy on hot afternoons. That food item was created in Capri. Legendarily in 1920s. Way past Michelangelo’s time.

Now you know why Michelangelo’s museum in Florence is known as “Casa Buonarroti” aka: The house of Buonarroti. But how did this place become a museum? Good question.

So it’s the early 1500s in Florence Italy. The city is bustling. All of Italy at this point had city states with their own government. Well, the money was in in Florence. And by ‘money’ I mean the Medici family. They were bankrolling the arts and sciences. The city was on a main river that ran to the ocean. The plague was dying down… I’ll tell ya, in this era, Florence was like a rave in Ibiza.

Okay, maybe not really, but things were HAPPENING in Florence. Thinkers were philosophizing new ideas. Painters were branching out. Tradesmen were renovating old ways of doing things and streamlining their trades. And our boy Michelangelo was in Florence working as an apprentice for Domenico Ghirlandaio, a well-known painter with a big ol studio.

After a few years, Mikey starts doing really well for himself. People are noticing his work. He’s got the attention of the pope in Rome and he’s commissioned out through, like…two holiday seasons. So what does he do with his money? He invests in some property. Even in the early 1500s in Florence, real estate was a good investment idea.

So between 1508 and 1514 he bought five buildings at the corner of via Ghibellina and via Buonarroti. (Of course, the street wasn’t named after him at that time.) The property was (and still is) two blocks from the famous Santa Croce church.

In 1516, Michelangelo returned to Florence to work on the façade of San Lorenzo.

Which I don’t think went well, because he never quite got around to it. I mean, he had plans and all, but he was pulled away to do other projects. A fact that is quite apparent when you visit Florence today and see what a façade looked like before it was decorated.

So Mike is living in two of the most spacious of the buildings he owned for about ten years. From 1516 to 1525. Ever the wise investor, he rented out the other three buildings.

Well, another reason our man put aside the façade project, was because Rome had just been attacked.

Yeah, the renaissance brought about all this enlightenment in many different areas. But this was also the time of the Italian Wars. When French, Spanish and other Italian states were fighting for dominance over each other. The ultimate king of the hill. There was a split at this time between Rome and another group in Northern Europe called the Holy Roman Empire…it’s a whole history lesson for another day.

So the guys up north, on May 6, 1527, invaded Rome with 20,000 soldiers. It took said invaders a month to loot and pillage the city. Well, you can bet your ass that people were starting to get real worried about who these forces would invade next. The Medici were banished from Florence and Michelangelo was called away from his artistic endeavors to help oversee the fortification of the city. He was actually called the Chief of Fortifications.

Of course, when your city is taken over what happens to the guys who are the ‘head’ of things? They are declared traitors. And as you might have guessed, when you are declared a traitor, it’s a good time to flee. So Michelangelo fled the city of Florence. But a year later, the Pope promises Mikey immunity if he returns to Florence and continues his work on the Medici Chapel.

He returns and by 1531, he completes two sculptures called Night and Day.

In 1532, Michelangelo moves back to Rome for the remainder of his life and passed away in his home there, he died in 1564 on February 18.

(All the while his properties were being rented out. You know, I wonder what that would be like, having a shirt-tail connection to Michelangelo: “My great great great grandparents rented one of Mikey’s apartments for years.” I would be telling everyone such a detail if it pertained to my family.)

After Michelangelo passed away, he left everything to his nephew, Leonardo Buonarroti.

But here’s the thing, when Mike was in Rome, as he got on in years, he really became interested in this idea of having a palace in Florence for his family. He actually asked his nephew to transform his five buildings into a palace. But his nephew wasn’t interested. When his uncle died, Leonardo brought the body back to be buried in Santa Croce, just around the corner. And then apparently thought about his uncles last request for about 26 years. Eventually, in 1590, he did a half ass restoration of the complex.

It would be one of Leonardo’s sons, Michelangelo Buonarroti the Younger (no pressure with that name, huh?!) Well Michelangelo the Younger bought another lot and worked on unifying all the structures so that there were four large rooms that could be dedicated to celebrating the work of his great uncle.

Today, Casa Buonarroti is one of the lesser known museums in Florence. Off the beaten path a bit, but with, what I think, are wonderful displays of one man’s life.

When I first went to this museum, I was shocked when I saw the shoes that might belong to the famous man. It was a most surreal moment. These men and women of our history live a sort of half life, imagined by our personal upbringings and experiences we project onto them. I fear sometimes historical figures become god like, in that they aren’t relatable. But here were Michelangelo’s shoes. Leather shoes that carried him through the streets of Florence where he ate and rested and gossiped. A group of researchers studied his shoes, did you know that? After their tests, they found that the man who owned the shoes was roughly 5’2 and “being of “middle height, wide across the shoulders, but the rest of his body in good proportion”—in other words, fairly average.”

I was so taken with Casa Buonarroti that I wrote it into Big Trouble in Little Italy: 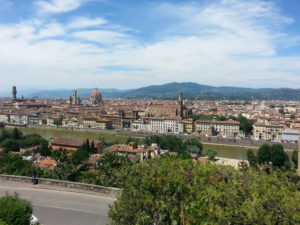 We wound our way through streets that were void of tourists, but a few locals passed us every now and again.

Finally, we came to a small arched doorway.

“Eccolo?” I questioned the word he used.

I nodded at the small bust of a man that was inlaid in a circle above the door. I read the sign on the glass door under the bust “Casa Buonarroti.”

Parker opened the door. Inside was a small ticket window. He purchased two tickets, the woman in the booth handed over a pamphlet and a receipt as she gestured about the building.

“Grazie.” He handed me the pamphlet.

“Apparently. He’s got a museum. Wanna tell me about him?”

“Aren’t you the one with the history degree?”

“You mentioned it a few times in Vegas. Kept pointing out things like Caesars Palace, Paris Paris and the Bellagio and giving me history lessons.”…

…I cleared my throat and waved a hand. “I’m missing something, aren’t I?”

“This is my favorite place in Florence. I found it accidently when I was twelve. We were visiting family. I was out exploring one day when it started raining and I came in here to wait. The man selling tickets told me to look around.” Parker gestured to the staircase we started up. “I was the only person here. I felt like I’d fallen into this great big secret. You know how you romanticize things when you’re a kid?”

We turned a corner into the first room off the stairs; sketches hung along the four walls, encased in glass. In the middle was a table with a sort of triangle atop it, lined with gorgeous sepia toned sketches.

Parker directed me to the far end of the room. There was a glass case with a pair of old shoes, a cape and a walking stick.

“This is what got me that first visit,” Parker said, “Michelangelo’s shoes.”

My eyes widened and I looked around the room. “Michelangelo’s? Oh, stupid Jessica, this is his house!”

“This is…amazing.” I took a closer look at the shoes. They were made out of soft leather and looked well preserved.

Parker took my hand and led me into the next room, a large marble relief hung on the wall. Chiseled forms of men twisted this way and that, all of them trying to climb out of the marble, a ladder of heads and torsos.

“The battle of the Centaurs,” Parker translated. “Michelangelo was seventeen when he made it.”

“Jesus, when I was seventeen I was crying over not being asked to prom,” I muttered.

“I would have asked you.”

He gave a humph in reply.

We walked through room after room, which all flowed into each other. One room had paintings on each panel in the ceiling and on the walls. Another had more sculptures.

“Did he really live here?”

“For a time.” He confirmed. “When he died his nephew made the place a museum.”

In the last room I found a large study of the Madonna and Child. It was lit by soft lights in the ceiling. 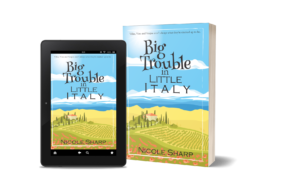