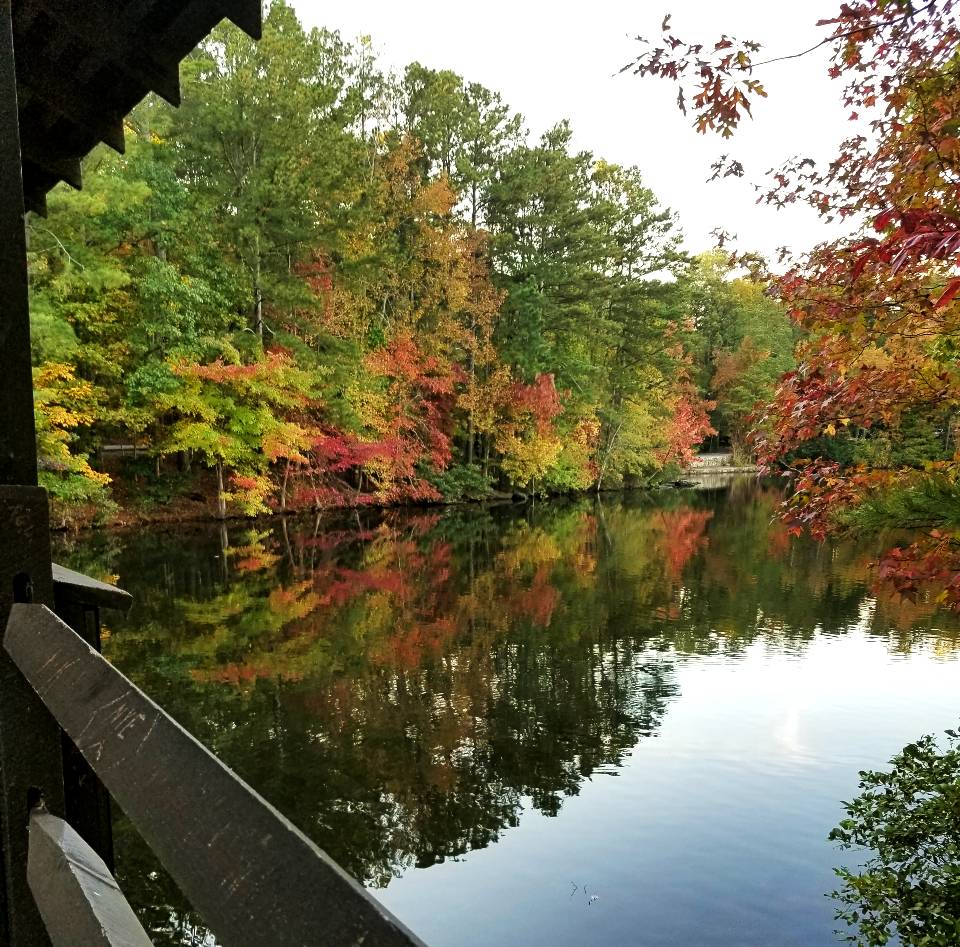 This is the time of year I yearn to settle into fall quotes and long rambling sentences while I make fun of the abundance of pumpkin spice flavored items. But this year, the falls colors too closely resemble the sky line of the west coast. The weathermen and women on TV keep an upbeat lilt in their voice as they talk about “record breaking highs and hurricanes and fire seasons.”

Every morning as I fill out my 2020 Bingo Card, it’s difficult to fight the internal soundtrack that begs to hum, “it’s the end of the world as we know it.”

I don’t dare utter the question “what else can happen”, because that would be tempting the Universe to answer said question. No, thank you very much Universe. I do NOT require an answer to that question. NONE of us do.

Instead I try to figure out how to put something good and something light into the world around me, but it’s difficult. If you are anything like me, you think such things but then the exhaustion washes over you and going back to bed seems like a much, much better idea. “Wake me up when it’s over” – this seems like my new mantra.

I stopped listening to the news and watching all my favorite late night talk show hosts four weeks ago, I still read a very calm, rational online newspaper so I’m not completely in the dark, but I can’t do the full 24 hour cycle any more.

(Side Note: Listening to the 24-hour new cycle is not good for our health. Constantly being bombarded with a steady stream of news and misinformation, whether it’s fed to us virtually, verbally, or in print, is not good for our psyche, health, and over all well being. Here, Here, Here and Here are a few articles to support my statement.)

But the news still creeps in. It feels like so many are hanging onto every twist and turn of the media in an effort to find some light, some joy, some damn hope in this world. But instead, they have strapped themselves into a chosen hell. And don’t even get me started on social media. Although, my favorite writer Chuck Wendig, who is so prolific and holding his hand out to his readers virtually these days, wrote something about how it’s okay if you’re not oaky. I just loved his turn of phrase when it came to talking about social media.

“It’s okay if you’re worried and sad and mad all the time and it’s okay if brushing your teeth feels like a heroic moment and if you can’t stop doomscrolling the Apocalyptic Stock Ticker that is social media.”

The Apocalyptic Stock Ticker of social media…love that.

We’ve been bruised and battered pretty good. Do you feel like you’ve been living inside a dryer that’s set to a hot, fast tumble while said dryer is rolling down a pretty steep hill? Like, the projection of the rolling dryer is just perfect enough to keep going and going and hitting every little bump just the right way? That’s how I feel.

And what I’m clinging to, what so many of us are clinging to whether we realize it or not, is a sense of persistence. Persistence, because life continues.

In three words I can sum up everything I’ve learned about life: it goes on. –Robert Frost

I love Robert Frost, but I read something like that and I want to punch him in the throat. Which brings me to quotes. Have quotes taken on a different bend for you? I see these quotes “Don’t let it break you. No matter how hard it gets, life goes on.” Um, hell no! Don’t you tell me what to do!

Of course, in my frustration against pragmatic quotes trying to make me feel better, I wonder what life would have been like during the 1300s, the days of the black plague if people had nailed memes to each other’s doors. “Do not alloweth the plague to get you down.”

So of course, I take a minute to look up quotes from the medieval ages, to see what that would look like. The well wishing and acceptance of the state of the world the Medieval people were living in.

“There is a remarkable thing about swans. They teach us that the troubles of death should not grieve us; for in the very moment of dying they make a virtue of necessity and despise their sad fate in singing.” -Gerald of Wales

So, I guess…Jeez Gerald, kinda rough buddy. But then again, this blog has  taken a weird, macabre turn, hasn’t it?

I looked for Medieval Greeting cards, because you know someone has to have come up with a line of cards. 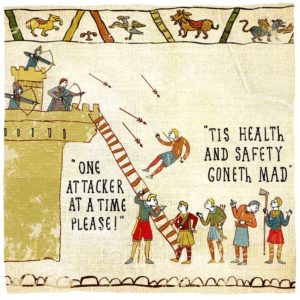 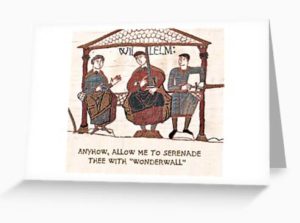 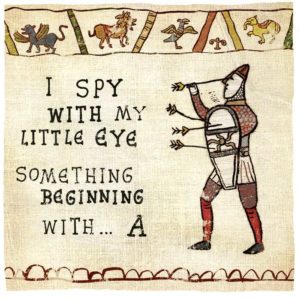 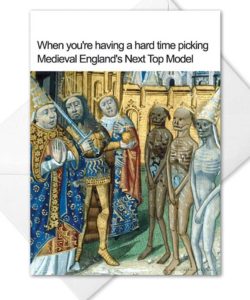 Well, we’re in the thick of it now, so why not keep going, right? It seems I’ve changed course halfway down the rabbit hole and got stuck on the “Highway of Illuminated Manuscript art.”

This art that was doodled around the edges of manuscripts is called marginalia. Medieval marginalia is weird. Not all of it, but enough of it. Some of it is pretty crass. There seem to be a lot of arrows in butts.

But to put these pictures into perspective for you, here’s how I see it: You have a mostly illiterate society, you’ve got the black plague, and you’ve got writers/illustrators who are trying to catch the ‘vibe’ of the 14th century, you know, these illustrators were trying to be the ‘voice of their generation’. Think of these next few pictures I share with you as a look at how Medieval Man was working through all his fears and anxieties of the day.

Also, I think something was going on with rabbits during this time. I’ll just put that out there and let you decide for yourself, but I think we need to forget about Murder Hornets and start looking at rabbits.

3) Death isn’t scary if he smiles. No matter he seems to be making a list and checking it twice.

4) Lions are symbols of power. Not sure what it means when a powerfu creature looks so morose. And I’m pretty sure whatever tune he’s playing isn’t something you can tap your feet to.

5) Arrows in butts. It was a thing and I think that’s where Monty Python got it.

6) Rabbits. Do you see what I’m talking about? It might be a problem.

7) I know the Python boys were pretty well educated, and they did draw from a very ‘rich’ heritage for their skits. Which leads me to feeling like the only thing this little guy on the left has to say is “I shall taunt you a second time.”

8) “Go Henry, Go Henry. It’s your birthday!” That sentiment but in Medieval Times. 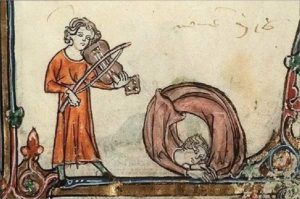 9) Were rabbits bigger in the 14th century?

10) The first time the phrase “I’ve come undone” was pictured.

11) Stop me if you’ve heard this one. A monk was riding a half man/half bear to a bar when he came across a naked lady in the forest… 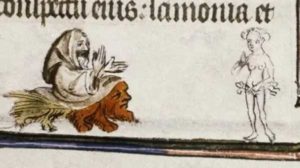 12) Here’s how we’re going to settle this argument. You go get your fastest snail, I’ll get mine. Then you bring your brightest banner and we’ll meet by yon tree. Then we’ll decide once and for all if any maiden can touch a unicorn or if it’s just virgins!

13) Over the river and through the woods…la la la. 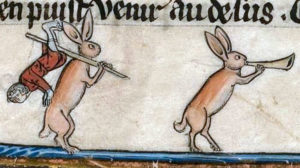 I hope you found this strange twist and turn as as entertaining as I did. I’m not sure what lesson we learned from the Middle Ages, the one foremost in my mind is that we MUST keep a weathered eye on the rabbits.

My friends, stay safe. Stay sane. I wish you a moment of peace and a true deep breath each day.