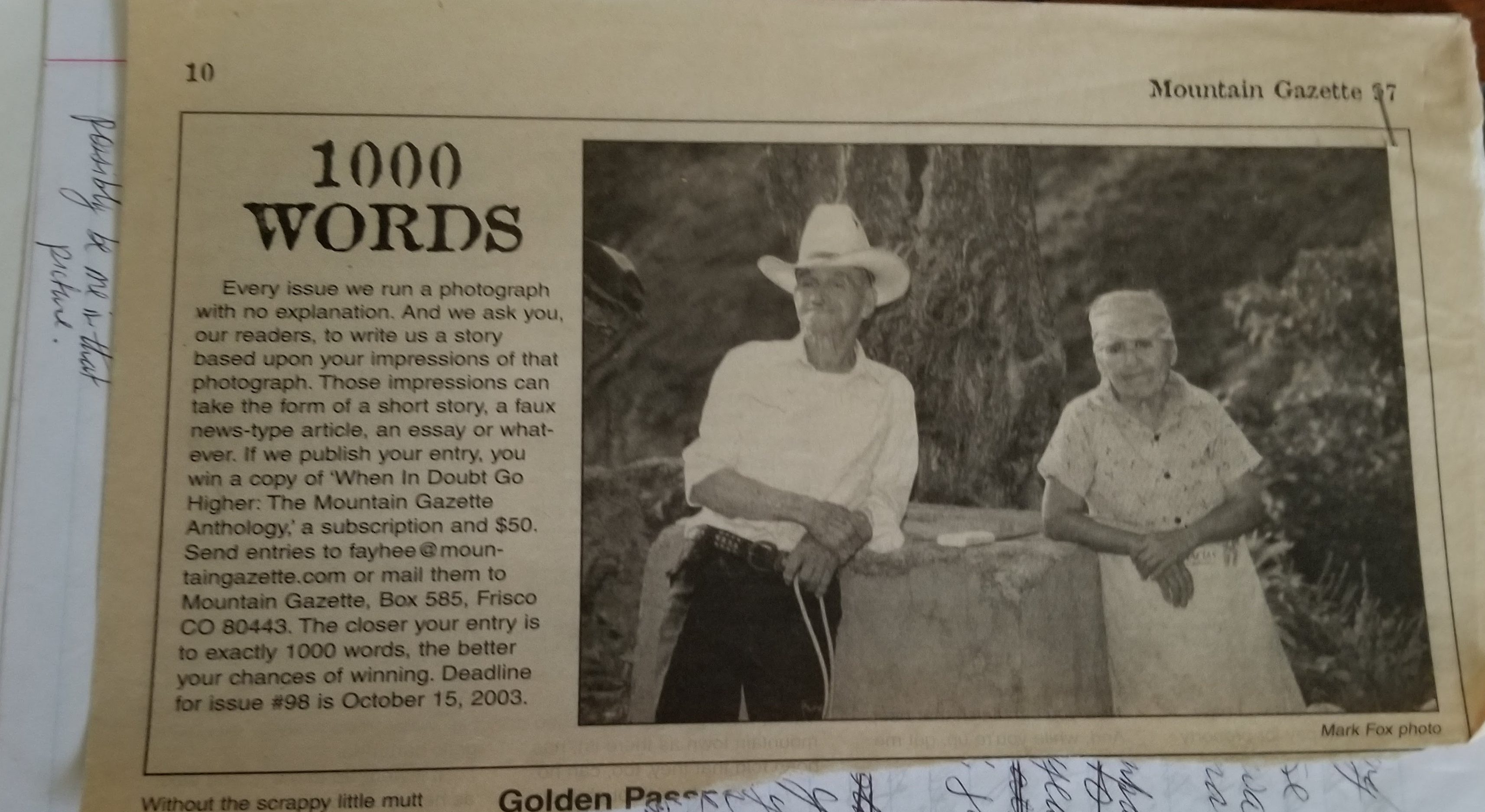 Here’s another short story. This one was inspired by a 1000 word challenge in The Mountain Gazette magazine. The year was…so long ago. The challenge was to tell a story of what was going on in the picture. I never got my story published in the Mountain Gazette, but it has won me second place in a writing contest and was published in Flare Magazine last year.

(And if you’re wondering what the picture was and if I saved it. Of course I did.)

Ending Up by Nicole Sharp

You end up this way.  Not quite sure of the man standing next to you, the man you sleep next to every night, whose snoring has kept you awake for the last fifty-two years.

You end up this way, embarrassed to smile because during the early years, you couldn’t afford dental work for yourself, only for your children.

You end up this way, trying to be patient when your grandson asks you to “say cheese”, as he aims the lens his fancy phone that stores the pictures in a place you don’t understand. How do you understand this young man who is constantly on that tiny phone that looks like a toy?

My grandson shows me the pictures on a tiny screen.  I yearn to tell him that isn’t me in that picture. It couldn’t possibly be me. Instead, I pat his hand and thank him.

His new wife is with him. She’s blonde, wears nice clothes. Uses the tips of her painted fingers to pick up something she dropped in the dirt. I want to laugh at her, but don’t. She nervously cheeps like a meek bird and asks me how my husband and I managed to stay together so long?

How do I tell this perfectly made up girl that it takes a lot of hard work; that you have to get your hands dirty?

You end up this way; you don’t start out with these intentions.

You end up this way, a stranger among people who call themselves family.

I had long black hair that framed my strong shoulders. I had shiny black hair when times were hard, when the world was full of dust, and when downtrodden families had no other choice than to become nomads.

I was an Indian girl then. Stripped of my people’s comfortable animal skin clothing and forced into proper gingham and stockings and placed in an orphanage with my brother.

I kept my hair though.

I met a cowboy when I was a young girl, a man who loved me for my hair and my smile and my strong shoulders. He told me his secrets, he told me his dreams, he told me of our future. He courted me and told me he’d take me away from the confinement of the city. He promised me land, so my soul could roam free once more. He promised me the moon and stars. He blushed when we first kissed. I was fifteen and I married my sweet cowboy.

I imagined my return back to the open plains with sun as far as the eye could see, with mountains in the distance, with wild earth beneath my toes. It was not a dream when I awoke early in the mornings to help my cowboy as we tended our few cows, a garden, and our little piece of land. It was home.

The war came and my brother went away. He sent me letters, reassuring me he was going to be fine. Only the letters came home. His body was never found. They placed a marker for him in a special cemetery for soldiers. I never made it to that place, which is fine, because my brother never really made it there either.

We tried to have babies, my cowboy and I. I lost the first two; girls. I buried them near the house by the creek, under a tree where I planted pretty flowers. I didn’t want to try anymore for babies.

My cowboy would sit with me at the end of the day and smile and look deep into my eyes, he’d brush my long black hair and we’d quietly share our stories.

The floods came that winter, after the war was over, as the heart of the world healed. When it rained we were thankful, we needed the water, but it didn’t stop. It collected in the rivers and ruined crops. My cowboy and I tried to move our cows to higher ground. I became sick then. The doctor told me I was pregnant once again.

The farm survived the floods; our heard grew and so did my cowboy’s ranch. We had two boys and a girl, and we spent many days laughing and smiling. I taught my children about their ancestors, about the ways of those that came before them. I taught them how to make fry bread and told them stories about the coyote and wolf. But the rock-n-roll music and the movies got in the way of their heritage. And television stole their birthright.

The boys married and helped out on the farm; they built homes nearby and I held my grandbabies, rocked them in my arms, and whispered stories of their ancestors in my rusty native tongue.

I worked next to my cowboy and watched my grandchildren grow up into strong boys and beautiful girls. They came to visit. Often bringing offerings, gifts of gadgets filled with what they called technology. I smiled and thanked them. I didn’t understand what was wrong with the old ways.

I smiled at my grandson’s wife and gave her hand a pat. My grandson told me he’d send a copy of the pictures. I wondered if that would be all that would be left of me when I died. A photograph of a weathered old woman, whose eyes desperately screamed, “I didn’t start out this way, I ended up like this.”

As they drove away, my cowboy’s hand finds mine. I look at him, worried, but there is a twinkle in his eye. He doesn’t see the old woman I do, he still sees the young girl with the long black hair. Maybe ending up this way, maybe it’s not quite so bad.