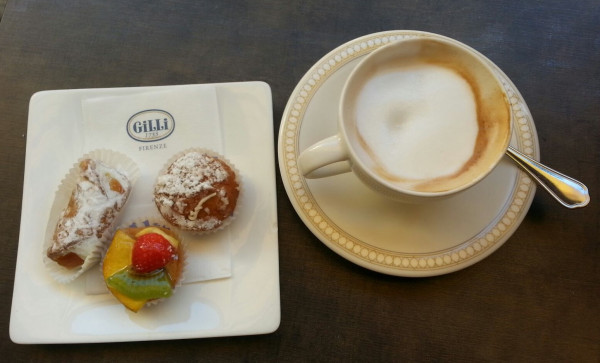 In honor of Friday the 13th, here’s a quick blurb from my book, The Italian Holiday. The characters just happen to be discussing Friday the 13. Only they are in Florence, in the Piazza Repubblica, sitting outside at the Gilli Cafe. So this post is twofold. A little writing but first let’s set the stage.

The Gilli Cafe has been in the Piazza Repubblica since 1733. It quickly gained popularity among the well to do of Florence. But it is most famously known as the café in the background of the picture “American Girl in Italy” from 1951. 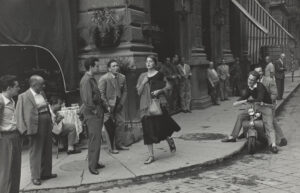 Gilli dolls itself up from the outside in, the windows always a showcase for the seasonal chocolates available. The outside seating area has tables set for the arrival of customers. Inside the almost 300 year old space is like walking into the hay-day of the 18th century. High arched ceilings, elegant décor and a wait staff to match, some dressed in crisp white shirts, black pants, vests and ties and others in suits. 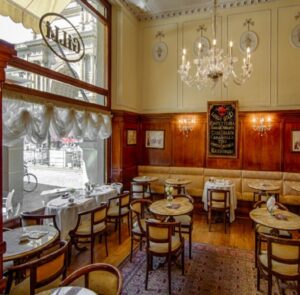 A large marble bar greets you upon entrance into the café, if you merely want to cozy on up for a quick coffee and a glance around. And if you’re going to look around, might as well take in the enticing case of pastries. A glorious network of attractive partners for any coffee you order. 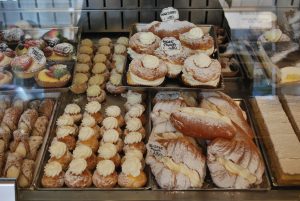 There is a dining area filled with small round tables and a menu that boasts several years of fame and glory and Hollywood star sightings at the establishment.

My characters, they sat outside so they could watch the early morning life  twirl around the Piazza Repubblica. 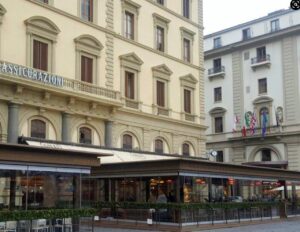 From The Italian Holiday:

Lorenzo shrugged and said something to the waiter, I understood the part where he ordered cappuccinos but that was about it.

“You okay?” He asked when the waiter left. He sat back comfortably in his chair, a King always comfortable wherever he went. Even if he was broken hearted.

“Yeah, you okay?” I attempted to mimic his royal flare.

It was his turn to raise his eyebrow in question. Our give and take of animalistic mimicry was the glue holding us together in this moment.

Although, he might be impressed more than questioning, I wasn’t sure, so I continued. “March 17th is the Ides of March, when Caesar was killed. I’m wondering if that’s the reason, or maybe it was the start of the superstition.”

“Do you know why Friday the 13th is superstitious in the states?”

I licked my lips and glanced around at the Piazza Reppublica. It was gorgeous, of course everything here was gorgeous. “Do you ever wonder, when Europeans come to the states, are they as enthralled with all our new buildings as we are with their old ones?”

“You know, don’t you?” Lorenzo prodded, refusing to give me the courtesy of changing subjects.

“When a girl tries to change the subject, you should let her.”

“Maybe. Why is Friday the 13th a superstition?”

I shook my head and glanced around me once more, then I gave the explination I’d given on more than one occasion. “So the thing about writers, and I swear I heard this from Stephen King, either one of his characters in a book said it or he did in an interview, I don’t remember. Anyway, he said writers do just enough research for what they are writing that they tend to know a little bit about a lot of things.”

“Until you are trying to remember where you heard something and if it’s fact or fiction.” Lately I had been joking that my reality was becoming skewed, there were times I had to stop myself mid thought, mid-sentence, middle of nowhere and try to figure out if what I had been sharing was something I read, wrote, lived or saw in a movie.

“So what fact or fiction do you know about Friday the 13th?” Lorenzo asked.

As much as I was trying not to make eye contact with him, I looked at him and that same intensity threatened a storm of butterflies in my stomach. How had I sat next to him on a plane for so long and not been effected by this?

And did he know how intense he was being? Did he think he was just being interested? And maybe he was just interested, but that interest bored a hole and stole my words and my thoughts and my breath. He hypnotized me with his stupid amber eyes, so I tried to concentrate on something else. Which led me to his lips. Normal lips of a human man. Not too full, not to thin, just normal. There should be nothing enticing about them. Except there was a memory in those lips. Those stupid, normal, passionate, warm lips.

The waiter arrived just then with our cappuccinos and a plate with three pastries. He set everything down and asked a few questions. Lorenzo answered and with a slight nod and the waiter was gone.

I picked up my cup and took a sip. Closed my eyes.

“So you decided not to stay for as long as you can?”

“Twelve has always been a lucky number.” I wasn’t about to talk about staying in Italy or going home.

“Okay.” He took a sip of his espresso and resumed his relaxed state.

I continued my bar room trivia lecture, “twelve disciples, twelve months, twelve Olympian gods, twelve numbers on a clock. These are all ordered and good things.”

“13 then, is the yang to 12’s yin, so to speak.” He nodded, interested, and I shook my head and cleared my throat in order to dislodge the way he made me forget what I was try to say, “you need 13 witches to form a coven. 13 is an irregular number. It was on a Friday the 13th that a king somewhere arrested a crap load of the Knights of Templar. Chaucer started the Canterbury Tales on Friday and said it was an unlucky day.” I waved my hand as if those statistics spoke for themselves and explained the superstitious Friday the 13th.

I took another sip and glanced at Lorenzo over the top. It was comforting having something tangible to put between us.