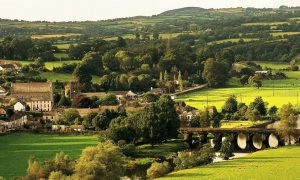 Amid the rolling green hills of Country Cork Ireland, tiny villages dot romantic landscapes every now and then. Mountains rise and fall, and “inlets along corroded coast lines” (I stole that one) give the southwestern coastline of Ireland the look of a land ripe with legends.

It was in one of those little villages, a fair distance from the coast line, but within the confines of County Cork that our Irish ancestors lived. You know, a great grandparent, some great aunties and uncles, random cousins who have become unnamed faces in old black and white photographs. Well, perhaps the names haven’t survived, but some of the folk-lore has. And what better day to dust off the stories handed down from generation to generation and breathe new life into them once more than St. Patrick’s day.

My dad has been telling me this story as long as I can remember. St. Paddy’s rolls around and at some point, he reiterates the tale handed down to him by his grandmother and a great-aunt.

It was a gray, stormy night in Ireland, which might just be any evening in Ireland. The rain was especially dismal that evening, coming in sideways, a fair gale of wind pushing the rain, assuring it covered the whole expanse of the island.

Locals gathered at the village pub. Most had a wee dram to keep the chill off and get caught up on all the recent news and possible gossip.

On this particular evening, the horrid weather ushered in a young man whose mood was as fowl as the storm he’d just left. With a frown and not a nod of greeting to any in the public house, he arranged himself at the bar and began to drink until he was good and drunk. A few hours later, he slammed his glass down and said loudly, “I’m tired of this shite, we live in fear of ridiculous legends. I don’t believe in the little people. Not one among you does in your heart of hearts, so don’t go telling me to stifle my voice.”

You could have heard a pin drop. Even the rain held its breath for several heartbeats waiting for  the young man’s declaration to dissipate into the rafters.

“Son, you shouldna be sayin’ such things.” The bar keeper warned.

The bar keeper pulled the glass away from the young man, “get yerself home now.”

The young man slid off his stool and wobbled toward the door. He turned, tipped his hat to the gathering and slammed the door as he left.

A few days passed, no one heard from the young man. Which was fine, as everyone thought perhaps they had enough of him for a while and he needed some cooling off.

It was a great great cousin of our family, a farmer of sorts,  that came across an old man who was propped up against a stone wall one morning.

The man didn’t move. The farmer smiled to himself, thinking of the times he had found himself a bit under the weather after too long an evening at the pub. Finally, close enough to the man, he called out again and tapped him on the shoulder.

The man turned, looking through the farmer. His eyes had a crazed, wide-eyed look about them. The farmer took several steps back and crossed himself for fear. It wasn’t an old man who was looking back at him, but the young man who had bemoaned the existence of the wee folk just a few days ago. His hair turned completely white.

He was never the same again and spent the rest of his days jumping at every slight sound and scared of his own shadow.

The moral of the story, if there is one, is that you don’t have to believe in leprechauns and the likes, but you might think twice before saying such a thing out loud.

So there you have it, a bit of Sharp family folk-lore for a St. Patrick’s weekend.

I need to look into the particulars of that story some more and I’ll get back to you.

Until then, I offer you an Irish blessing.