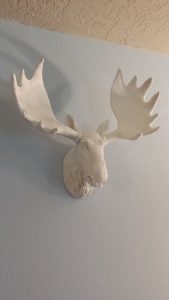 Why writing moose?  Have we talked about this yet?

Second, the moose.  This is easy and at the same time kind of a long story.

Now you don’t have to buy into spirit guides, I mean, I do because I’m 1/234 Cherokee, on my mother’s side.  Actually, I never gave spirit guides much thought beyond Native American Folklore in my young life. And when I was 19, a spirit guide was the farthest thought from my mind.  At that time, I was busy buying into being lost and not sure what I wanted to do with my life.

My first year of college found me drowning. In the deep end of the ‘I don’t know who I am or what I’m doing with my life’ pool. For lack of a better idea, I followed the footsteps of several high school friends and got lost amid the collegiate crowd at a State University.

While I didn’t know what I was “supposed” to be doing, the only feeling that radiated with intense assuredness was that I didn’t belong there. But where I wanted to go or what I wanted to do, I wasn’t sure.

Then came an experience that would change the trajectory of my life. I was invited to visit my great aunt and uncle for a few days. It would have been one thing to visit my aunt and uncle at their home, in Boise, Idaho.  But this particular summer, they were volunteering for Idaho Fish and Game. Smack dab in the middle of nowhere.

Oh, give a confused, fledgling writer of a girl with a gypsy spirit the opportunity to go to the middle of nowhere and she will jump at the chance  needing no other information.

After making arrangements that would be needed,  I found myself at Stonebreaker Ranch in the middle of Chamberlain Basin in the heart of the Frank Church River of No Return Wilderness Area in the middle of Idaho. Quite a mouthful, huh?

With a fistful of babysitting money in hand, I invited myself to stay, not for a few days, but a few weeks.

Now, for this story, it is important to understand two things.  I have always had a wild gypsy spirit, a wanderlust if you will, to travel and go and see and experience.  And secondly, I spent my developmental years in Southern California.  Busy-hectic-smog filled-O.C.-(before it was a TV show)-graduating class of 500-Hollywood is only 30 miles away…that Southern California.

I went from here: 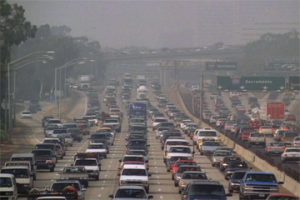 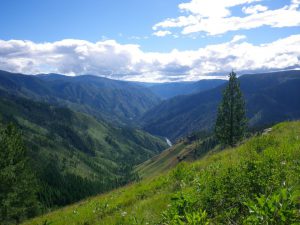 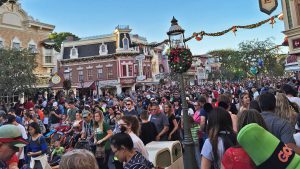 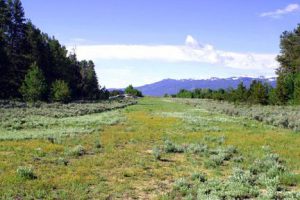 The first task in my journey was getting to the Ranch.

Often referred to as “the Backcountry”, the River of No Return Area is 2.3 million acres big.  There are 2,616 miles of maintained hiking trails in the area.  The Middle Fork of the Salmon River runs through the whole thing and offers 100 miles of whitewater rafting.  The ONLY way into this haven of wildness is by horse, backpack, or small plane. No wheeled vehicles are allowed in this area. Small planes are allowed to land on a handful of  makeshift airstrips.

I went by small plane.

Here is the plane I took from Cascade, a small town 100 miles north of Boise. I flew out with Ray Arnold Aviation. This company has contracted with the Post office to deliver mail to those who’ve chosen to live outside of the reachable parameters of city life. Every Wednesday Ray Arnold Aviation delivered groceries, mail and chartered people into the backcountry. 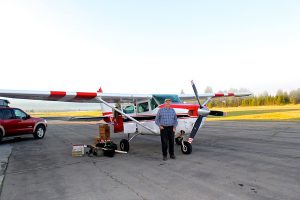 Here is a landing strip in the backcountry: 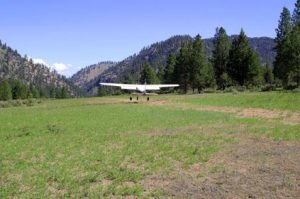 Now if you are like me, you noticed that there is nothing but a grass field, cleared of trees that consists of a landing strip. What you don’t know is that my first decent into the area, all smiles and white knuckles, was attempted twice due to the pilots need to “buzz the elk and moose that were standing in the middle of the field so we could have a clear landing space.” 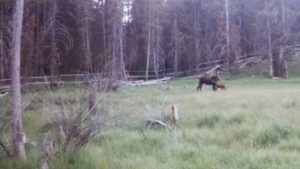 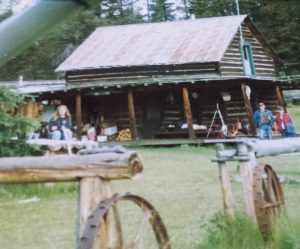 I exited the plane and was greeted by the sight of the only buildings I would see for the next few weeks. 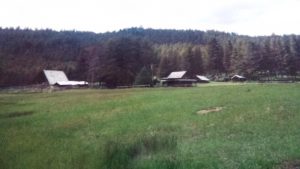 I put my suitcase away, arranged my sleeping bag and was ready for the tour of the property.

My Aunt and Uncle were volunteering and while here, they were helping to fix up the property as it had been newly acquired by the Fish and Game.  First I was shown the bathroom, ‘we have plumbing’, my aunt said happily. It was a nice flush toilet, located in a nice outhouse sort of building, about a hundred yards from the main house. Which, in the middle of a darkened night with only a flashlight, that one hundred yards was a shaky trip and not much comfort was found for this city girl in the promise of plumbing.

The house was set up with propane for the stove, and a few propane lanterns hung throughout the downstairs. Heat came from the fireplace. There was a hand radio for emergencies and to get in touch with whomever it was that took grocery orders. The plane that brought me in would be back once a week to deliver groceries and mail.

Of course electricity was not available. And water was delivered to the house from the river, via a ditch behind the house. Water with a brown tint that we boiled so it would be drinkable. I tried to lean into the rustic light brown tint to the water; it was just part of the experience. 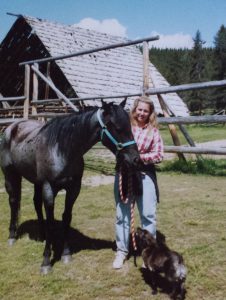 My 19 year old self looking ‘woodsy’

I don’t know how much help I was, but I tried to work hard. I hiked almost every day, pulling yards and yards of old barbed wire left from 1920s ranchers that first settled in this area. I followed rivers and streams and pulled tangled barbed wire. I wound it up and attached to my day pack, carried it back to the ranch.

My other job was to walk the ditch once a day that carried our water to the house. To make sure it was clean of debris and obstructions so the water wouldn’t stop flowing.

The backcountry is further North than I’d been in my 19 years. So the summer months give sunlight to this grand area until about 10pm, when dusk finally come upon the land. After finishing the work day there were still several hours of daylight before bedtime. So I played card games, read, hiked, read, wrote, or read. Or wrote. 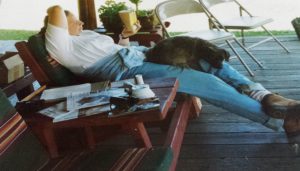 The other thing I did was hike all over that wildflower covered country as much as I could.  So I was informed how to handle myself if I ever came across a cougar, an Elk, or a moose.

My uncle had told me that if I ever came across a moose I should just get out of his way.  The best thing to do was get to a group of trees where the moose couldn’t get his antlers through.  If it was a female moose, I needed to slowly back away and make sure I wasn’t between her and her baby, if there was one.  But then I was assured, they would be more afraid of me and run away before I even saw them. 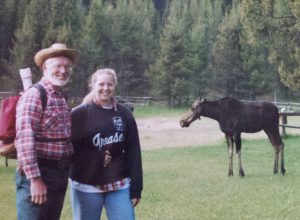 My uncle who told me to stay away from Moose, telling me to get closer to one for the picture

So there I was, tromping around part of the 2,616 miles and I heard a rustle. I looked up and there he was. 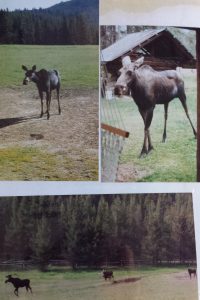 Just a few of the moose

My heart in my throat and I looked around me a bit manic because no one told me what to do when you come upon a moose and a group of trees is NOT nearby.  I stood still and taking a deep breath tried to back away, v e r y s l o w l y.  But then, my moose caught my eye.  We stared at each other for several heartbeats. That damned moose, well, he looked into my very soul. He then gave a nod to me, so human, I stopped moving. So when he continued forward, passed me so close I could have reached out a hand to touch him…the heart that fluttered in my stomach when I first saw him, then dropped into my shoes and I started crying.

Like a crazy, uncontrollable, I’m in the middle of nowhere by myself and I had an experience so spiritual, and that was certainly not what I was expecting and still for some strange reason everything in this moment right now makes sense…that kind of crying.

It shook me to my core and I sunk to the ground with the weight of it. Maybe it was a lot of things at that point in my life that I had figured out, or not cried for. Perhaps it was exhaustion and all the work I’d been doing. Mostly though, I think it was that moose.

I applied to Boise State University when I got back to Southern California, was accepted and moved to Idaho a year later. And I never stopped writing. 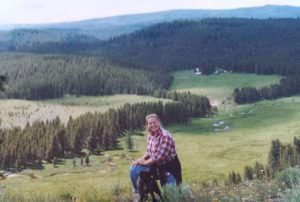 The Middle of Nowhere

So why Writing Moose? Well to put it simply, I kind of believe that the moose is my spirit guide.