My potato has a hollow heart.

Seriously, was cutting up potatoes for dinner tonight and one of the homegrown monsters, upon being cut in half, exposed what looked like the shadowed remnant of a purple butterfly or possibly a fairy. It caught me off guard. I called to my husband, the farm boy who gets to jump in and explain all these strange elements of my life that I’ve never encountered before, me having been raised in the concrete paradise o’ southern California. 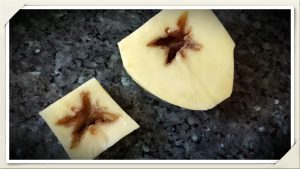 He shrugged in reply, no big deal and said, “Cut around it, it’s just a hollow heart.” 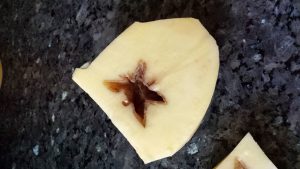 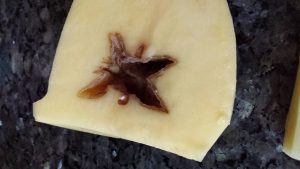 No, it’s lovely and sad and wonderful and tragic and filled with possibilities.

Every possibility bumped around in my mind.

Perhaps when a fairy of the fabled old world is, for one reason or another, condemned, perhaps they are shut away inside a potato. Perhaps it was a practice that started centuries ago with Irish fairies. Celtic Sprites.

Perhaps it was a punishment imposed on imps that helped humans travel between the standing stones. Maybe it was a smaller blight, just allowing a human to see them. Perhaps such a horror was looked down upon in ancient times. The offensive fairy was taken before a council of elders. Old tree spirits, or the standing stones themselves. After the trial, the fairy would be banished into oblivion, into darkness where their name was never to be recalled by others.

Then, I suppose, some took pity upon the forgotten souls. Some didn’t agree with the harshness of the judgements of the elders. And while it was not a grand gesture, perhaps those in charge of such things planted seeds with a memory of the forgotten. A reminder of the heart that, upon banishment, was left hollow.

There might be another legend that is actually attached to the hollow hearted potato. But it doesn’t matter, isn’t that moment of inspiration the basis of fiction?

No wonder folklore is so ripe with values and horrors and lovely stories and dreamy phrasing. 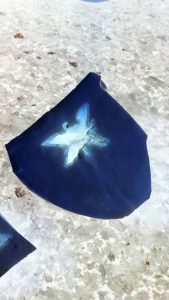