There is nature in my backyard…

The snake hissed angrily. A large striped, unwanted fiend that was attempting to take up residence. Across from the snake, the dog stood growling, a rabid monster ready to pounce.

I slowly backed from the slithering beast to take hold of the dog. He balked as my fingers dug in, twisting a hand full of the matted fur in case I had to hold him back.

The taunting tongue of the tempter of Eve sickeningly hissed; mockingly. The dog’s chest rumbled with anger.

The voice of a small child cried out in despair, but I could not retreat to hush the worrisome calls. It was a standoff and whether the snake would strike myself or the dog first remained to be seen. My raised heartbeat echoed in my head, ringing warning bells that stole my focus. I shook slightly, the snake curled further into itself, a warning.

The glint of steel assaulted my eyes, just there, within reach was a shovel. A glorious weapon. But how to get to it?

I pulled on the dog, perhaps if we edge our way, slowly, at an even pace. Then what? A collection of varied outcomes at the end of an impossible task awaited, but still, I must try.

Another cry from the child. If the snake struck first, if it was me he assaulted. What of the child?

I willed the dog to move slowly with me, pulling him with all the strength I had. Never taking my eyes off the snake who stuck his tongue out at us again, another cautioning that he was swift and would not go down without a fight. I could not imagine a situation where the snake slithered away and the dog let this new threat, this new toy, retreat.

I tried to be methodical, hypnotical in my movement. My own lame attempt to soothe the snake into a false sense of security.

Almost, I could almost reach it.

One finger made glorious contact, my hand gratefully closed on sun warmed wood. I gripped with all my might.

If I let go of the dog would he lunge or would he stay? I had no choice, I needed both hands now.

“Stay.” I hissed the word low, with all the alpha force I could conjure. “Stay.” I repeated again much for myself as for the dog and the snake.

I let go, pulled the shovel into the air and then with all the strength I had, as quickly as I could slammed it down on the snakes head. My weapon hit its mark, but only to stun the beast. The dog went wild and I screamed once more, an unearthly sound, “stay!”

I needed to cut off the head. I prayed the shovel was sharp enough and allowed no other thought in as I landed my blow and the tip squished unexpectedly. I  flinched but could not let up now. It had to be swift and merciful, if he had struck us, he would have been quick about it too.

So, this happened to me two nights ago. A harrowing experience to be sure. I’m fine by the way. However, the whole experience got me thinking about prose and poetry and storytelling and exaggeration. Why? Because I’ll give you one bit of factual information about the situation I found myself in the other evening and it’s this.

Of the faithful dog that helped me fight the evil beast. 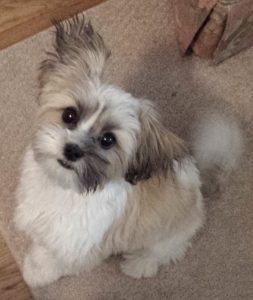