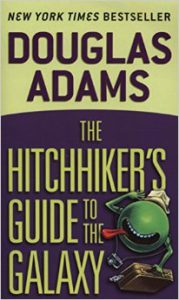 I recently re-read Hitchhikers Guide to the Galaxy. I love that book, and the books that follow in the collection. I love Douglas Adams for his writing and his wit. I love that, as a good friend reminded me, you must read the book with an English Accent.

I was also thinking about one important lesson from that first book. As a poor excuse for a world traveler myself (I haven’t been as many places as some, but I’ve been to more than others); I found one piece of advice from the Hitchhikers guide to be invaluable. 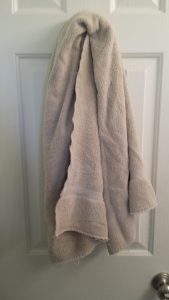 “A towel, [The Hitchhiker’s Guide to the Galaxy] says, is about the most massively useful thing an interstellar hitchhiker can have. Partly it has great practical value. You can wrap it around you for warmth as you bound across the cold moons of Jaglan Beta; you can lie on it on the brilliant marble-sanded beaches of Santraginus V, inhaling the heady sea vapors; you can sleep under it beneath the stars which shine so redly on the desert world of Kakrafoon; use it to sail a miniraft down the slow heavy River Moth; wet it for use in hand-to-hand-combat; wrap it round your head to ward off noxious fumes or avoid the gaze of the Ravenous Bugblatter Beast of Traal (such a mind-boggingly stupid animal, it assumes that if you can’t see it, it can’t see you); you can wave your towel in emergencies as a distress signal, and of course dry yourself off with it if it still seems to be clean enough.”

I was washing laundry today and came across an old friend, my old towel. I should have rid myself of the dinosaur cloth long ago, but I can’t do it. My towel and I have actually traveled the world over together. It’s been my strange home away from home at times, and I realized as I folded it. It is twenty years old. (What can I say, I take good care of my things?)

When I first moved out of the house all those years ago to attend college, I bought my brand new, fuzzy, tan-will-match-anything towel. Spent a little more money than I had on a damn towel, but it has proved worthy of the cost. I don’t remember what brand it was or even where I purchased ye ol’ towel.

I have taken towel with me backpacking and used it as a pillow. Used it to help keep warm when an extra blanked was needed on other camping trips. I’ve used it to lay out under the Colorado sun when I visited Mesa Verde National Park. I’ve used it as a washcloth and of course after washing my hair wrapped it around my head. (I indeed covered the basic uses of said towel as suggested by the Hitchhikers Guide.)

I liked the idea of having an object that could be used for so many different purposes. And over the years, as the towel seemed to be holding together relatively well, it became a strange symbol of freedom and being on my own. Of life and love. It became the one thing I didn’t leave home without. 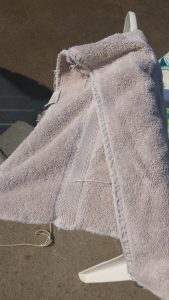 Towel has lived in California, Boise, Colorado. It has visited Washington, Oregon, Italy and the Philippines, just to name a few.

As I mentioned, towel is 20 years old now. It’s been washed who knows how many times. It’s seen numerous addresses I called home. It hung in the first house I moved into with my fiancé and helped the overflow of company we had when we were married. When it was time to move into our new house this past year, I didn’t even contemplate throwing it out, just packed it neatly next to the other new towels we bought.

Because you see, my old towel has proved itself to be almost the most massively useful thing I ever left my childhood home with in order to travel the world.

*side note: hard to take a picture of a towel and make it look interesting. 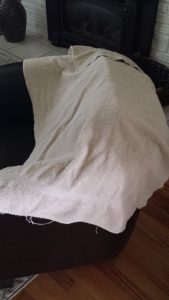