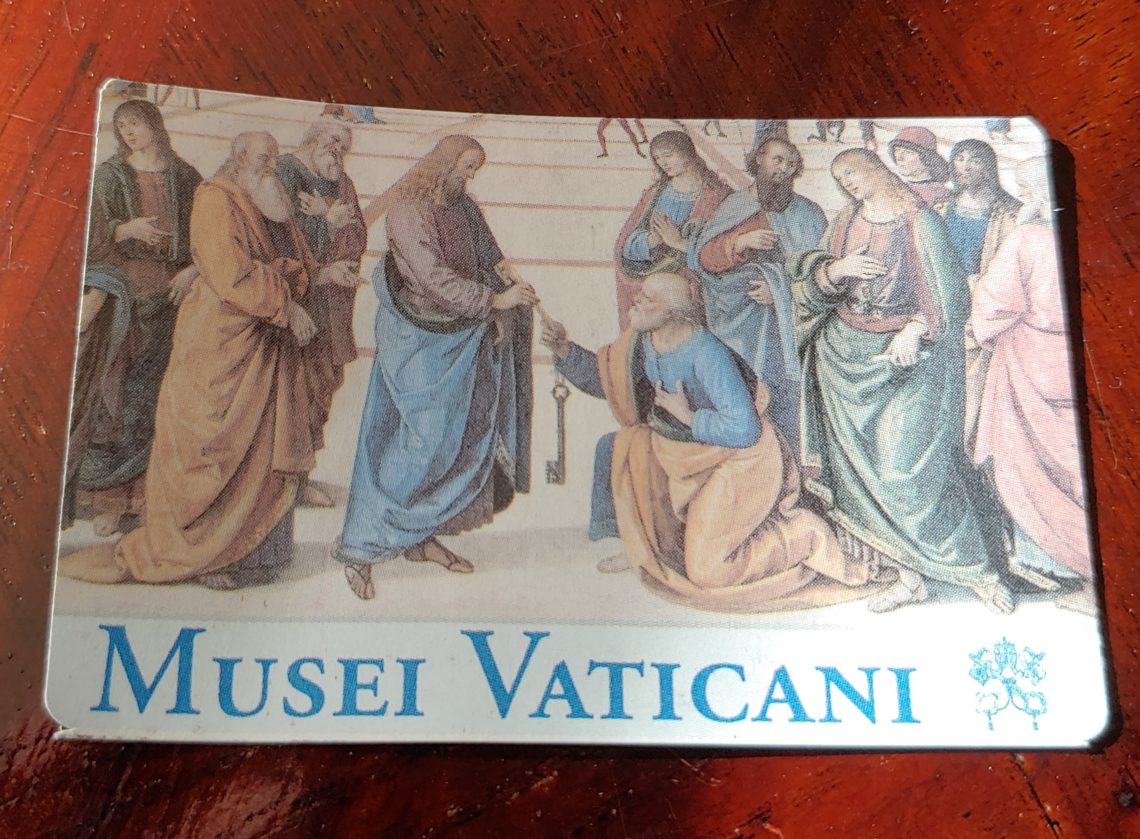 I don’t remember much of my visit to the Vatican Museum, it’s a fuzzy memory. There are bits and pieces I recall, but the last time I was there was 2003, and this past year has wiped my mind of so many memories, it’s difficult to remember that I put water on to boil when I leave the kitchen and go to another room.

But I was thinking about the Vatican Museum today because I’ve been doing research on the Vatican Library.

Let’s start with what I remember.

The years was 2003, my dad, the ultimate Clark Griswold, took his family to Italy. The idea was to take his mom back to the ‘homeland’. (Our people come from Genoa, Italy.) So the idea was to do a pilgrimage, and see all the sights and sounds of the mother country.

We went during the hottest summer in 500 years, an unintentional coincidence. We packed five of us, mom, dad, sister, grandma and I into a European station wagon and drove from Milan to Rome. Visiting all the tourist spots in between.

Just how ‘Griswold’ was this vacation? We left a piece of the car bumper in an Autogrill gas station parking lot somewhere after Florence. Walking back to the car from the shop, my dad and I even pointed and laughed at the piece of bumper, commenting “I hope that wasn’t important.” We got lost several times on backcountry roads of Italy to the argument of everyone in the car. There was even a daring moment of parking when my father screamed “hold on” as he jerked the steering wheel, crossed several lanes of oncoming traffic, jumped a curb and slammed our car of screaming passengers into a parking spot with a heroic, “we’re here!” as he applied the brakes and took a shaky breath.

I found the journal I kept during that trip. It’s a minimal amount of writing; most of it is an abundance of similes, metaphors and complaints and odes to the heat. When I was looking for my impressions of seeing the Vatican Museum, there were none written. This is all I have of that day:

“Day 9: woke, nice breakfast, took a cab to St. Peter’s Basilica. Went into the church, separated then. G-ma, mom and sis went shopping. Dad and I went to the Vatican Museum, Bocca di Verita, Hercules Temple, Venus Temple, Circus Maximus, a quick trip through the Roman Forum and then we took a bus, shopped on Via Veneto then back to hotel to get everyone to go to dinner.”

I broke the trip down that way, but when it came to the really impressive writing of that trip, it’s thirty pages of dribble about the heat and how it made me feel and what I thought people thought about me as a tourist. (*insert eye roll here.)

The heat aside, when my dad and I do ‘sightseeing things’, it’s more of a sport. How many sites can we see in one day? I submit the above journal entry as my evidence.

(Note: I was really sick on that trip, had a cold, got mosquito bites the first night, started my womanly time the next night, got pink eye the third night…I told my sister, “at this rate, by the time we get to Rome, I’m going to walk like Quasimodo and be drooling out of the side of my mouth waving at ancient structures babbling, “isn’t this glorious?” However, my family (and I) are of the same mind, that had I not had all those ailments, I would have run them into early graves with my go-go-go energy. That’s what had to happen to my body in order to slow me down enough that my family could keep up with my tour guide sensibilities.)

So, I’m writing about the Vatican library for my current Work in Progress. I wanted the scene to be reliable, which requires research. I wasn’t about to rely on Dan Brown’s description of the Vatican Library, as it has been widely pointed out it was all the work of his imagination.  Which means I spent two days doing research of the Vatican Library and the Vatican Museum. Attempting to pull my own visit from my faulty memory banks.

The only thing I really recall from my time at the Vatican Museum, was my normal rushed “wow, this is cool hurry up” mentality. Dad and I raced through the map room, a long hallway with some of the earliest devised maps hanging, giant tapestries upon the large walls. Our heads on bobbles, we nodded and oohed, “this is cool. Can you imagine, being the first to explore and map the world and the maps ended up here?”

“Yeah, so cool. Oh look another hallway of old statues. We’ve only been in Italy for 9 days, I would like to say I’m getting a little tired of old churches and statues and paintings, and I am, but still they are so cool. I’m so impressed! Hurry up!!”

Our main goal in the Vatican Museum was to see the Sistine Chapel. To stand under the awning of glory painted by the great Michelangelo. And we did. And we stopped and marveled with our heads tilted back at such a feat. We stood among the hushed voices of tourists, a library like politeness takes over when you enter the room. There is no air-conditioning, at least there wasn’t then. So the sweat still drips down your back and the body odor of tourists from around the world mingles with the stale air that fills your nostrils, but it was Michelangelo’s work. And all the other discomforts paled for the duration of our admiration of the Sistine chapel.

So, are you curious what I did with two days of research? Of course you are.

The priest took them down a long corridor with decorations unchanged for centuries. Marble flooring crisscrossed with black marbled detail. White columns frosted with golden and each open panel of wall and ceiling was painted with a fresco of saints and heavenly bible scenes. A vibrant, cobalt blue hugged the frescos, so that anyone without glasses would admit the main color scheme of the corridor was blue and gold. Sophie tried to keep up with the young priest as well as take in the whole of the scene before her, she tripped once and smiled at her brother who rolled his eyes as he tried to help stabilize her.

The priest took them into the main floor of the library, large tables, an open second floor balcony wrapped with walls of old books. It was underwhelming. Especially for those who might have expected that The World’s First Library, this shrine to books and learning, should be a glass encased, climate controlled collection of guarded antiquities.

“Is this how Markus infiltrated the place?” Jace wondered in a whisper to his sister.

“How many staff do you have working in the archives?” Sophie asked the priest in answer to her brother’s question.

“To date, we have eighty staff members working throughout five departments. Our Archival collections, illustrations, cataloguing, coin collections and our restoration department.”

Sophie raised an eyebrow at her brother, that’s how Markus got in.

The priest continued to lead them down a hallway and then down marbles steps that encircled an antique cage elevator. When they arrived in the subterranean level of the library, they were ushered into a never ending, florescent lit room of sterile stacks of books.

“This is what my college library looked like. Only not as creepy.” Jace supplied.

“But none of the books in your college library were originals that dated back to the 1500s on them.”

When it comes to research, I’ve never felt that it’s a waste of time. I come across such cool facts. It’s this newest ‘cool fact’ that has me writing this blog today. Have you ever wondered who opens the doors of the Vatican museum? Me either. This wasn’t something I ever had to think about. But I’ll tell you this much, in my next life, I think I want to open doors. Not just open doors, but I want to be a keeper of keys.

In Italy, the word ‘clavigero’ is used to describe the “key keeper.”

At 5:30 in the morning, a gentleman by the name of Gianni Cera, goes into a secure vault and retrieves 2,797 keys. The keys to every door in the Vatican Museum. Each door and gate in the museum has its own key. And it takes a group of five men about an hour and half to walk more than 4 miles of museum as they open 300 doors each.

What is generally considered a ‘custodial’ job, is, in my humble opinion, the coolest job I’ve heard of in a while.

Can you imagine, the early dark hours of the morning; your only company the jingling of keys and your job, to open up the history to the coming visitors. According to Reuters, the Vatican Museum sees about 5 million visitors each year.

The route Cera takes “is unique and extraordinary because each door and each key has its charm and its secret that it reveals to the world.” Even the keys are extraordinary. The oldest key is from the 1700s, it opens door “401”. 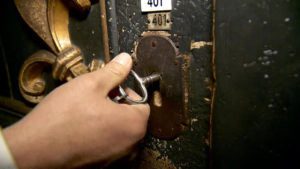 Cera turns on the lights in the map room. 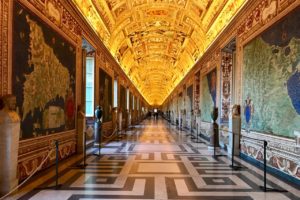 He wakes up the Gallery of Statues. 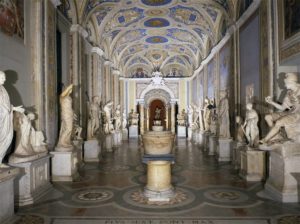 He opens the Niccoline Chapel, painted by Fra Angelico. 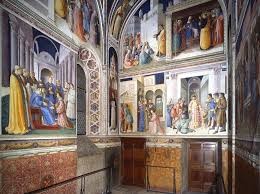 The Raphael Rooms where he turns on the lights to illuminate Raphael’s painting “School of Athens.” 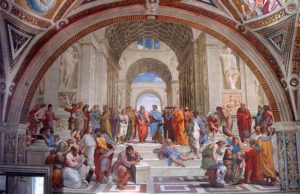 And Cera is the first to step foot into the Sistine Chapel and send his regards to the glorious work of Michelangelo.

My favorite part of this story is where Cera ends his morning. At the top of the “Scala del Bramante” (Bramante staircase), where all of Rome can be seen as the sun rises. 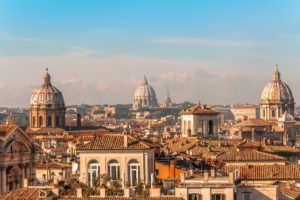 The above picture isn’t of the ‘view’ from the top of the stairs. The perfect pictures of that is here and National Geographic has the rights to that photo. But this photo isn’t that bad.

There is a short story in this research, I know that for sure. But I thought you would enjoy this little tid bit of information I found.