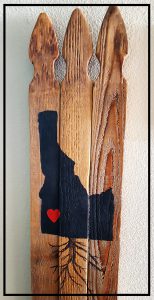 When the holiday’s come around, be it Christmas or Birthdays, I get a little put out. Not that it affects the whole day, well, sometimes it does, but sometimes it just turns my guts a bit. Why? Because I miss my family.

My hippie parents instilled such big wings on their children, myself, my brother and my sister that we took to flight and landed so far from where we were raised. One in Italy, one in Denver, and me in my Northwestern corner of the world.

And it’s good we did that. We had courage and strength enough to do that. And there is an added bonus of always having somewhere to go visit. Only, there are holidays and nephew’s baseball games and dance recitals and camping trips and birthdays I miss my damn family.

I read an article a few days ago that finally seemed to capture what it was I felt for the life I live between two places. It comes down to this idea: Idaho is where I live. California is home.

I’ve been gone from the place I grew up for 22 years and still I have my parents phone number in my phone as ‘Home’. I always thought that was strange and so as to not offend my husband, thought I should change it. But I didn’t really want to. There was something comforting, there is something comforting about being able to phone home. (Oh E.T.)

Still, they carved out a life for us. They carved out a home, a community, friendships. Over the years, they’ve figured out a favorite Mexican Restaurant. The grocery store where they are loyal customers. They figured out our favorite beach, the best drive into Los Angeles, the preferred weekend getaway. It came slowly, all this life and building. I wonder if it took years for them to feel comfortable or if they still feel a little like visitors.

I feel like a visitor in Idaho. I don’t have a personal history ingrained into the streets here. I can’t point to the very spot I had my first kiss. Lost my first lost tooth. I can’t drive by and give a wave to an old house, or my grade school. Hell, I have friends whose children are now attending our grade school in California. And I love that.

I grew up studying the history of the Missions along the coast of California. Ours was a history of wild Spanish conquistadors and strong Hispanic men and women attempting to defend their land. The place I studied was the end of the line for those who escaped the dust bowl. I studied a state where luscious fruits and vegetables were grown in the fertile soil. I was surrounded by the thick 80s smog of an overgrown city. I grew up in the magic of actors and actresses taking their place in the lineup of dreams that came before them. And I moved within intricate webs of freeways that transported people from one place to another. I grew up in a concrete jungle and I loved it.

I don’t know the history of Idaho. I’ve learned of course. I know a bit about the city I live in. I watch my kid who now knows this place as home and wonder if I should hurry and leave, hurry and move somewhere else. So she’ll have roots like I did.

The funny thing is, I have more roots in Idaho than I ever did in California.

My maternal great grandparents, all four of them, are buried here. On the way to take my kid to school, every day we pass the house my grandmother grew up in. The house my great-grandfather built. It’s run down and vacant, but it’s still there. My grandfather’s dad was the Mayor of a small strip of land called Garden City.  My grandmother’s parents owned a Country Western Bar, The Silver Spur, that many folks who were born and raised here still remember.

I have done some research for articles I’ve written and found traces of my ancestors in the area back 100 years.

It is a strange thing. To have grown up so far removed from a sense of ingrained family history and feel so homesick for the history that was ingrained.

Heritage and history is an interesting thing. I am a watered down Italian, Irish, English, French woman. The blood so diluted the traces of a European history is scant. Yet we cling to the Italian-ness because they were the last in the family tree to arrive on the shores of America. My sister moved back to the homeland to infuse her own blood  with more Italian-ness. Maybe that’s not what she’s really doing, I know she dreamed of moving to Italy her whole life and she’s just living her dream. Still, it’s an interesting thought.

I guess in that same fashion, I moved to Idaho to work on a different infusion. Another branch of the tree and discover where part of me came from.

I walk around my house that we’ve lived in for three years now, no longer feeling like I’m intruding. What gave me solace when we first moved in came from France Meyers (of Under the Tuscan Sun fame). “Pick one room and make it yours. Go slowly through the house. Be polite, introduce yourself so it can introduce itself to you.”

I’ve changed so much of the house, but there are little nods to the previous tenants I’ve left. Little things here and there. The linen closet still has the labels from the previous owners, denoting where the towels, sheets, and dish cloths went. There is a strip of wallpaper I found from the beginning of the house’s history. I framed it to keep the memory protected. For posterity? I’m not sure. For the feelings of the inanimate object of the house? Definitely.

The last three years, every guest, every laugh, every tear, every celebration held under our roof has infused itself into our walls and I’ve busted my ass to build a home here.

And yet, as I get ready for a family reunion this summer in southern California. I’ve been on the phone with my brother and sister a lot, and the one thing we’ve all continued to get excited about is the fact that soon we’re all headed home.

I used to fight the idea of home and house, of residency and heart. Feeling I needed to pick one. That it had to be one or the other. But maybe both ideas can co-exist.

I live in Idaho and California is home.