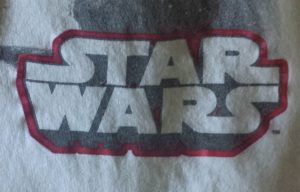 I married a Star Wars lover and because of that or by process of osmosis or the Force; that love has seeped into my blood.

It wasn’t intentional, I didn’t marry into Star Wars on purpose. It just happened.

Don’t get me wrong, I like Star Wars as much as the next person. I love the movies. I can’t recall how I saw the first movie, maybe it was in the theater or perhaps I saw it on Video. What I do recall is how I saw the second one, The Empire Strikes back at a drive in theater with my family. A Drive in!

I sat wide-eyed with bated breath as a magical world of space unfolded before me. Engulfed in the elements of storytelling and special effects. My over active imagination gave way easily to the suspension of disbelief. I felt that movie to my very soul.

I didn’t go out and beg for posters or toys or other Star Wars paraphernalia, but I did get a book. When it was time to order scholastic books, somehow I convinced my mom to buy me The Empire Strikes back book. A cheap 80s rendition of a coffee book telling, glorious full-page layouts of pictures from the movie.

Weeks later, or perhaps it was years as time felt longer when I was younger, the books came. They were delivered unceremoniously by our teacher and I remember the glee at being reminded that I was one of the handful who received a book.

I carefully held the floppy tome in my hands, flipped through the pages gently and grinned as the story unfolded under my fingertips. I don’t think it was so much an awe felt at holding my own Star Wars book as it was my insatiable love for books in general. Holding a new book there was always, and still is, a moment of benediction, as the fresh pages give under my fingers, a silky smoothness of a new adventure just waiting.

I wasn’t a nut for the Star Wars franchise. I was however, one of those kids that grew up with Star Wars. It’s like our children now who will never know a time when there wasn’t a computer in a house. And in my child’s case, will never know what a home phone line is.

I grew up alongside Star Wars. It was as if it became part of my generations DNA somehow.

Then, the whisper came of a new movie, a new part of the story had been made. I was not among the first who ran to the theater, but I did make it. And I sat in the darkness and was disappointed. This wasn’t the Star Wars of my youth. But I stuck with it, I had mixed feelings about things like CGI and a sadness, once you go Jar Jar, there’s no coming back from that. It was as if the Star Wars of my youth, the suspension of disbelief was pulled out from under me.

Then I met a man.

We liked each other and do what you do after dating for a while and find that we didn’t want to live without the other; we got married.

We moved in and combined our earthly goods.

And that’s when it happened, slowly at first. A Darth Vader t-shirt here, a storm trooper there. 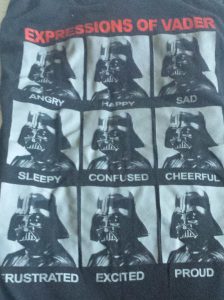 It wasn’t really visible at first, or even evident. It crept in, this fandom. This love for Star Wars that I had married into.

Suddenly, there were posters and tie fighters that were being made into surround sound speakers. More t-shirts.  Shoes, coffee mugs, candies, collector figurines still in the original packaging. Wedding glasses etched with Darth Vader’s face and the Star Wars theme song that was blared through speakers after we were announced man and wife. 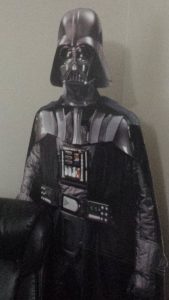 My education came next, not in an overwhelming sort of way, just an opinion here and there. Things about the cannon of Star Wars. The semantics of space flight. George Lucas. It came in snippets while watching shows like Big Bang Theory. Funny movies like Fanboys. And the re-release of the trilogy with updated graphics and such.

Then came the first trip to Disneyland and the kid in my husband bought t-shirts, made his own droids, had our faces superimposed on movie posters, purchased Darth Vader Mickey Ears, and Disney Storm Trooper pins. 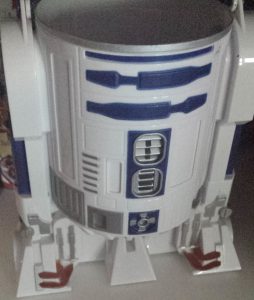 Then we found out we were pregnant. My mom brought out my baby book.  She read through it while we waited for our kid to come, and there it was, a mention from my 6th birthday, a list of my favorite things. I had a crush on Luke Skywalker. My husband hooted with delight.

It was all downhill from there. 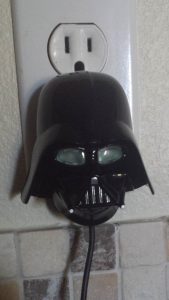 I have no opinion about Lucas selling out to Disney, but when it first happened, the arguments that came ringing out of my husband’s office were intense.

Then came the yelp of glee that echoed through the house from the announcement that there was going to be a new movie and that they had signed on Ford, Hamill, and Fisher.

Now, it’s palpable. The excitement that is floating around our house as we wait for the coming movie. With the new release of the Stars Wars accoutrement this past Force Friday, there’s a buzz about the coming movie. It’s growing.

I admit, I’m excited too. From the first trailer that was released, when I heard Harrison Ford declare, “Chewie, we’re home.” I got the itch under my skin.

I might have married into Star Wars, but apparently, and don’t tell my husband, just like the damned Force, it’s been inside me all along. 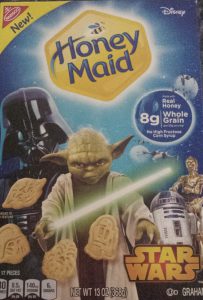 *Note: All the pictures are of items that were sitting out and I didn’t have to go to any trouble to take.  Except the Christmas tree. I could have put so so many more pics…