There are many ways in which the New Year is celebrated.

Some lay in a prone position on the sofa while hangovers dissipate. Others watch parades and attend parades. Some clean the house in a sort of good-bye to the holiday season. And still others celebrate with family and friends over nice meals.

This year, I found a different way to celebrate and say hello to 2016.

It began with waking up and bundling myself against the Idaho cold that we are prone to this time of year. I packed a few things in a bag, gave kisses to my little family and ran out to my friends waiting car.

Exactly one hour later, with bated breath, I stood on the shore of Lucky Peak Lake in minus -5 degree weather, in my bathing suit, as my friend Michele instructed, “Don’t think, just run.”

The excitement was palpable.

When we first arrived, we had to hike down to the water’s edge, the winter water level being so low. There was a lot of laughter, some of it nervous. A lot of it nervous. The music wafted over our heads growing with welcoming arms as we shortened the distance that separated us.

Checked in and with T-shirts we hadn’t quite earned just yet, we approached the water’s edge for a peek. The growing anticipation had its icy grip on me now. Ice blocks wiggled with the slow ripples of the water as it laughingly lapped at the shore and winked in the sunshine that was no help on this freezing New Year’s morning.

A costume contest was underway with winners announced and given prizes. Elbow room was decreasing and a seven minute warning was given.

I licked my lips and nervously laughed. What the hell had I gotten myself into?

The distance between seven minutes and four was lightning fast. The question of what to do next went unspoken as everyone around me took off their big snow boots and Sorels and traded the warmth for water shoes, boat shoes, and Teva sandals.

I took off my pants and jacket and shirt with a shudder. My hands reluctantly put the items down and grasped for a warm blanket as the two minute warning was given. My pulse quickened.

All too soon it was time to shed the blanket and offer my skin to the negative five degree morning. Michele and I stood at the shore as hoots and hollers mixed with the music that had lyrics about “you crazy” drifted across the water as an offering, an apology for our disturbance, perhaps an acceptance of our offerings.

I nodded my head and gave an awkward smile. “Full immersion, right?”

She nodded her head and took my hands and gave it an excited squeeze, or maybe it was a laughing squeeze, she had conned someone else into doing this with her.

“As soon as you can, dive under and then head back.” She said.

The countdown started, but I didn’t hear the numbers above the roar of excitement and screams of others as we realized what we were about to do.

The ‘Go’ moment resounded against the snow laden shore and I took my first step into the icy waters and shouted against the cold with my fellow passengers in this moment who gave up cheers and yells and barbaric yawlp’s.

It was as if my skin was being torn at by shards of ice, I don’t remember thinking much other than now seems like a good time to dive.

I popped out of the water and turned back toward shore. I fought a sea of splashing arms and legs as others fought to take their moment and those of us who had already had our moment attempted to get back to a warm towel.

Steam rose off my body as I tried to find Michele’s husband, our anchor in the chaos who documented the craziness and who stood with towels and blankets and sleeping bags at the ready.

My screams of cold, such as I’ve never experienced before, joined with other runners and the final documented moment as I slung a blanket around my shoulders was, “Holy shit!” 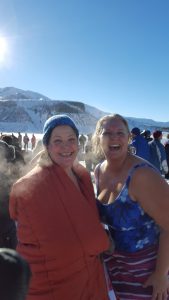 The Radio Station pumped out more songs about being nuts and then cleverly advised us to ‘Shake it off’ through Taylor Swift as we attempted to warm ourselves up.

A dressing room had been set up for women and men, but standing room only meant it was quicker to just pull on the boots, wrap the towel and blanket tight and head back to the car.

An uphill hike never looked so good, my brain insisted that the walk would warm up my extremities and help my frozen toes find some sensation once again.

Eventually, once dressed in the t-shirt I now believe I’ve earned, my wet hair covered with the warmest hat I own, my buns happily warming in the car and the feeling returning to my toes I laughingly said, “Next year, I’m in.” 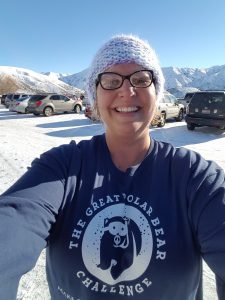 It’s not for everyone, that’s for sure. When I relayed the story to my father he continued to tell me how crazy I am. My sister’s in-laws in Italy all yelled “pazza” over the phone, crazy. I explained that it was for a good cause, for the Make a Wish foundation. (Because if it weren’t for a cause, it would just be insane people jumping into frozen water.) My mother told me she might do it and then thought better and said she would go wrapped in a thousand blankets and drink hot coffee and video the moment for me.

I would be remiss if I didn’t admit that I’ve spent the better part of this past week wondering what it would be like. This ritual Norwegians and Alaskans have been doing for decades, this polar bear plunge. I was nervous, not knowing what to expect, but I can handle nerves. I’ve been too much an adventure to let a little anxious stomach keep me at bay. I wondered if it would just be cold such as I’ve never felt. Or if it would be some strange earth moving moment for me.

It was a cold the likes of which I have never experienced. Pins and needles and shock.

And while it wasn’t life changing, it was strangely spiritual. It was definitely a baptism of sorts, a baptism of my soul in the waters of 2016.

So my friends, as you greet the New Year with your own rituals and traditions; with an aplomb of hope and wishes for futures not yet written, I wish you the best of all things in 2016.