“How funny your name would be if you could follow it back to where the first person thought of saying it, naming himself that, or maybe some other person thought of it and named that person.”  Part of a poem called MYRTLE by John Ashbery 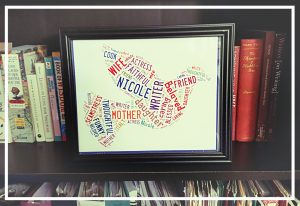 Victory to the people is what my name means, according to the Greek definition.  OPA!  But, I’m not Greek.  Or maybe we were at one point, way down the line, way back when, that is, if we were around, my line of people and all.  I know we have sailors, there were actual pirates, none of them with my name, but possibly some that sailed under the influence of bringing ‘victory to the people’.  And those pirates with the victory might have been sailing around, or near the Greek Islands.  Maybe.            Knee-Coal; a harsh NEE sound and the over pronunciation, as in Monty Python’s The Holy Grail and the English K….Nigits.  Nee.  Or the part of the body used for kneeling.  Followed slowly by Coal, a rough K and a swallowed Ell.  Coal, as in the black sooty stuff dug up by miners.  That is how the Japanese exchange students used it.

Nicoletta, with a romantic trill and twirl and an Italian wink is how that Roman guy in the Piazza in Florence said it.  But his name was Nero and he had his own problems.

St. Nicholas is how the kids in Catholic school used it when Christmas time came, right after we learned about the saints.  All of them taunting, where’s my present? And me, secretly depressed because my saint wasn’t martyred in a cool way, not flayed alive, no eyes gouged out, no ripping apart by underfed lions.  Sigh.

Ninny, to two little kids who came along after a stint of time my parents gave me to allow me to think I was going to be an amazing, fruitful, blessed, only child.  Ninny to the younger brother who couldn’t pronounce the K in the shortened version of my name.  Ninny to the even younger sister who caught onto the nickname and made it stick.

But simply, it was my father, having taken French in High School who suggested the Nicole that has become…well…me.  And quite simply, because the seriously proposed Blue Jean they wanted to call me, because Elton John had the number one song that year, wasn’t going to fly with my grandparents.