Anne Lamott, in her book Bird by Bird, suggests one write

There is a whole chapter on it. The ins and outs of her reasons behind writing about school lunches and then her examples of what she herself wrote of her own school lunches. Strangely, this all put me in the mood to write about, you guessed it, school lunches.

I attended Catholic Schools in Southern California for…ever. You would think, parochial school would mean big bucks and fancy shmancy cafeterias and the likes. Well actually, no. When it came to lunch time at the school I attended we did not have a cafeteria. We had a covered area outside complete with faded green, red and yellow heavy-duty steel picnic tables upon which we ate our packed lunches.

In High School, there was another outside covered eating area, but there were no tables, just rows upon rows of benches. We ate lunch on our laps, and thank God the sandwich is portable.

The only food offered in grade school that wasn’t brought from home, was milk. There was a program in the mid 80s, perhaps it started before then, perhaps it continues today, I’m not sure. But it was something about making sure kids got at least one glass of milk a day for growing bones and the sort. So before first recess, gray plastic trays with the appropriate number of cartons of milk were placed just outside every classroom. It was a delightful moment, because it heralded the impending arrival of recess.

Milk wasn’t free in this program, it was paid for by loving parents who might have been guilted into purchasing it, because if you do it right, it’s true what they say about Catholics susceptibility to guilt.

So the bell sounded and recess had finally arrived and if your parents had purchased it, one carton of ice-cold milk was yours for the taking.

But there were a lot of kids who did not care about milk and didn’t like it, the first sign in my young life that we might not all be the same. And while my joy in milk might have caused others to look at me questioningly, their lack of joy in milk caused me to reevaluate them. But it was a win-win because I usually was given an extra carton by some well-loved, milk hating friend. There was no shame in my gluttony, no moment taken out to point out my difference. I don’t remember the milk being a make or break moment.

I do however recall that I went off the milk for about a month in sixth grade, or maybe it was seventh, when the boys began using their milk cartons and their left over lunches to create a mixture of undesirable ooze and then, perhaps in an attempt to impress each other or the girls watching horrifically to the side, said boys would launch these milky bombs at the side of a building and congratulate each other with raucous hurrahs as the contents slowly slipped down the walls.

But lunch. My school lunch was a brown bag filled lovingly with blue label specials.

During my childhood, the generic brands were just white boxes with an off brand blue strip and a tired font that boasted the contents of the box. Macaroni. Potato Chips. Noodle Soup.

Maybe boasted isn’t the right word. And the font was a wanna be Times New Roman, like the folks at the generic food plant couldn’t even afford the rights for the use of a decent font.

Our pantry was not a runway of shiny packages that housed our sustenance. I think sometimes on the back of the Corn Flakes box, a monstrous thing that never fit in any of our cupboards because it was so big and it lasted so long, because we did not like corn flakes…but on the back of that there might have been an intriguing maze of sorts where you had to get the chicken to the corn. But the chicken was sad and tired and the corn was boring.

I don’t begrudge my mother for shopping blue label, oh not at all. You see, my folks decided to put three kids through parochial school and they both worked hard to make it happen. Even though my mother will read this and cringe thinking of all the years she did financially creative things with grocery shopping in order to make a family of 5 fall asleep each and every night with full bellies. But that she did. A feat in and of itself it was. It’s rather amazing actually.

My mother was a coupon queen before such a thing existed. She would spend roughly $100 a month and be able to feed five people three times a day for 30 days. Because of that alone, there’s a sense of pride that comes when I think back to my school lunches.

When it came to the making of said lunches, mom would set up an assembly line on Sunday nights. We all gathered around the Sunday night Disney movie, which we watched not because of the G-rated-ness or the family-ness of the shows, but because it cut down on arguments about what we all did want to watch instead.

Disney was the compromise.

There were five jobs. One person would be ironing the weeks clothes.

Another person would be playing a strange card game of making sandwiches. Shuffle up and deal out the bread, the bologna and the cheese. And into plastic baggies. Four of us were taking lunches for five days. So when twenty sandwiches were made and bagged, they went back into the bread bag and then into the freezer.

Smaller hands might be bagging chips for the week. Blue and white label “Potato Chips.” Nothing waved, nothing twice baked, nothing puffed or BBQ-ed. Those bags were put in a bowl in the freezer next to the sandwiches.

Dad did the cookies. Remember the chocolate, vanilla, lemon sandwich cookies. They came in a large flimsy plastic tray, three rows of cookies for about a buck back in the day. I only liked the vanilla. I don’t know if my brother or sister like the other kinds, but I know dad did. I think he bought them so he could have the rest when we refused them because we didn’t like them. 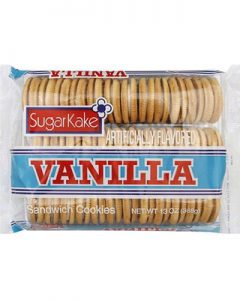 So when morning came and it was time to make our lunches, mom would streamline the brown paper bags, write our names on them, most often she would put a heart around our names and we’d grab a sandwich, chips and cookies. It was a pretty amazing system, everything was thawed by the time lunch came around, so no complaints. If we had a drink, it was most likely one of those rounded bottles with the foil top lid. 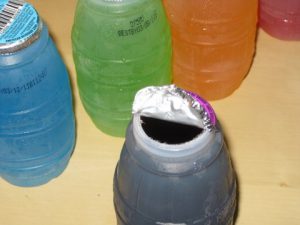 Those cookies though, those were my one and only tradeable item. And let’s be honest, the street value of three generic lemon cookies is pretty low on the tradable scale.

I don’t know if my school lunch made me think differently about myself, there was always a rush to hide the heart around my nickname as I got older. But I don’t think I saw much difference among all of my classmates and I. Some had shiny chip bags, some had fruit roll ups, but it seemed we all had two white pieces of bread with perfectly acceptable substances between them. I knew there was a difference between my plastic sandwich bag that folded over and some of the other kids who had the fancy Ziplock technology. But I had a sandwich, chips and cookies just like most everyone else.

Lunch in grade school was not the social affair it became later in High School. I recall lunch being something to get through quickly as possible so I could go run around and play. Or just get some distance between myself and the building I was being taught in so I could breathe. The 6th grade version of a smoke break.

I don’t begrudge my school lunches, in fact, I think I cherish them. Huh, who knew?

Write about your school lunch.