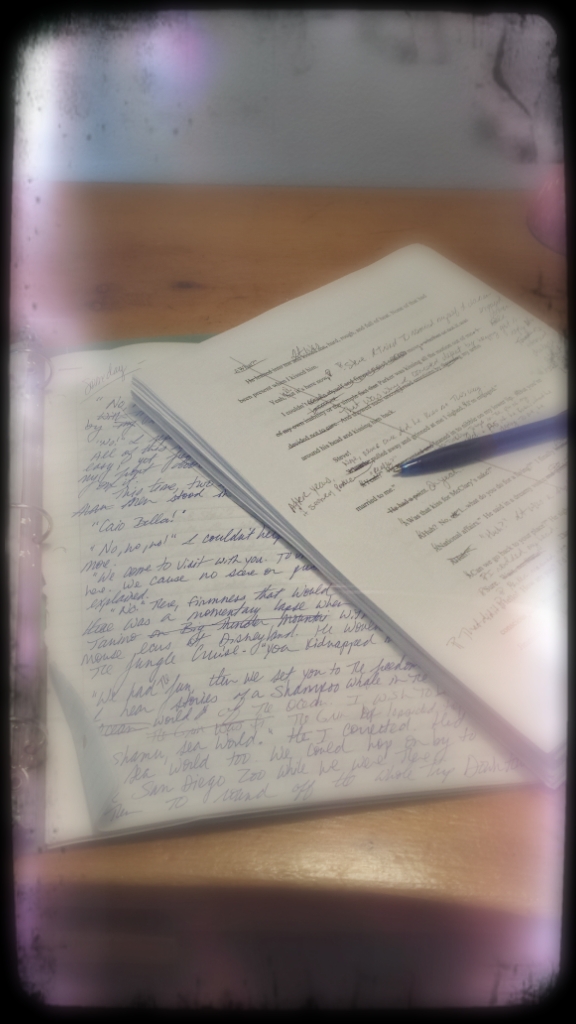 I just went through my manuscript, the final clean up before it is requested to become a query in the long line of emails on an agents desktop.

And then whisked away to become number one on the New York Times best seller list.

The damn book is written. I have just edited said damn book for the fourth time. And now, it just needs to be metaphorically Febrezed and rolled with a sticky lint roller brush thingy so I can send it off.

So I do a little housekeeping on said manuscript, my final steps in my process. I always search for the word seem, seemed, seems…it’s just something I’ve done because an old fiction writing teacher who said if you use that word once then you’re not a real writer. The delivery was pompous, but it is kind of a good rule. So I search for those words and just replace them. Because something isn’t going to just seem like a shit storm, it is a shit storm.

I polish the edges as much as I can myself in this final process (before I decide to re-read the manuscript and tighten the bolts a little more tightly). But today I noticed something that just caught me a little off guard, a little word that continued to pop up. Apparently, I’ve spent so much of my subconscious time just trying to make sure things never ‘seemed’ like anything in my books, I never realized just how much I ended up using the word: Just.

So I plugged that little word into the magic ‘Finder’ and just found that I used it 335 times in my 86,453 word manuscript.

It was an interesting thing to try and justify when I needed to actually use such a weak word, most of them I took out and suddenly the sentence was stronger. But I realized, that when my main character talked, she needed it. It was who she was, always trying to justify herself.

I am not amazing at the grammar and punctuation side of things, I understand a lot on some sort of subconscious level. Like maybe the nuns in Catholic school secretly forced the rules into our blood stream and it’s a part of me now. (Then again, could it be the English teacher father that imparted the intuitive understanding onto my actual strain of DNA? Well there’s something to bring up at next week’s therapy session.)

All of this finalizing has made me reminiscent of the bits and pieces of information, wisdom, nonsense, and how-to’s I’ve gathered from other writers and classes and conferences over the years.

As a writer, actually owning it, I was lost. I didn’t know anyone else who was doing what I was trying to do. So I read a lot, took classes, and tried to learn. Some lessons were helpful, but a lot of advice I balked at.

How dare you hold a mirror up to what this road I’ve chosen is actually like.

The first thing that blew me out of the water and almost stopped me when I first started writing and had five actual short stories under my belt: The 5th book you write is the one that will actually be ready for publishing. Five books!? What the hell?! I couldn’t see beyond ten pages of a short story? How the hell was I going to write five damn books?

But here I am, 15 finished book, about 10 others that are almost done, five short story books, and an obnoxious amount of short stories.

And to be honest, around book 5 I found my own unique voice and how I really write.

The second thing that blew my mind was that it takes 20 to 50 (yeah, that isn’t so big a range at all) submissions to get one tiny win. Aka: acceptance. So then I started submitting my short stories and I have a book filled with rejection letters, “Dear Ms. Sharp, we are sorry to inform you…we apologize….we cannot at this time….and we wish you well in your future writing endeavors.”

Each one a dagger in the heart, and on days when I received 5 or more rejection letters in the mail…oh I picked up that pint of ice cream and hid well under the covers with my frustration and tears. But after ten minutes of that pity party, I dusted off my rump and jumped back up to start all over again. A new idea, a new thought, and I forgot about the submissions and I had fun.

Crazy, for about every 50 submissions, I got a win.

Third one that I hated and for some reason made me cringe, was that writer’s write. Everyone else makes excuses. I too called myself a writer for a nice four year period and everything I wrote was an idea in my head that never made it onto a page. I mingled with other writers and we all lamented the “process” and secretly loathed/loved that one person who was producing mass amounts of work and had no time to mingle with us because they were too busy…writing.

I finally put all the rules out of my head, got to the bottom of how I write, and found the joy again. When my fingers are flying and the words are coming and the characters are driving the ship and I don’t know where I am, who I am or even when I am and get disoriented when I look up from the work…good Lord. That’s why I do it. It’s life then in those moments.

When I started writing, when I worked writing into my life no matter what I had going on, I became that person I loved to hate, because I had so much that I was producing I didn’t have much time to mingle and lament.

The fourth idea that made me want to quit this whole trek, is that this whole process you go through, it’s all a weeding system. Oh for fuck sake. This lonely thing I am trying to do, sit at a computer, at a piece of paper day in and day out so that I can share my internal stories and thoughts with the world mixed with the process of writing query letters, of submitting, of getting the work done, of becoming better at your craft…the first part of this whole process is done in order to thin the heard. To see who really has the thick skin for this life, who can hack it, who wants it bad enough.

Can’t we just declare we want something and that is good enough? Then give the jobs out accordingly? Though, if we did that and did it at an early age, the world would only have teachers, firefighters, and superheroes. With the occasional nun and vet.

So I’ve put my time in, I’ve hardened my skin, I can take rejection, I can take criticism and I’m still standing. And I needed to learn how to hear people bad mouth my work, that’s for sure. Like that twit Swift said, (and trust me, I hate this as much as you do) “hater’s gonna hate hate hate hate hate…”

Okay, so the latest lesson I’ve been learning is about sentiment. Word usage. My pompous windbag of a writing teacher that I love to hate, said that he would spend a long time trying to figure out exactly what he was trying to say and if the words he was using were the right words.

Never! I would never sit around and try to figure out if something was majestic or magnificent. I wouldn’t be that person.

So were they right? All those that have come before me and whose advice I’ve gleaned?

Yes, and at the same time a resounding HELL NO.

Because I’ve learned one thing in the past too many years since I started writing: No two authors are the same. Therefore, no two processes are the same. But sadly, yeah, you gotta do the writing if you’re going to call yourself a writer.

And just have some fucking fun with the whole thing.