I was thinking about David Sedaris this weekend as I finished the book Let’s Explore Diabetes With Owls. I was lucky enough to hear him speak when he was last here in Boise, which, on the ol’ Nicole Sharp timeline, was one kid and one house ago.

He is so funny, he crack me up. Maybe because as I read his books, I can hear his voice. Don’t worry, I don’t need a doctor for this. (Yet).  Mr. Sedaris records his own books for the audio sales, and I’ve listened to several of his books. And caught as many of his interviews as possible. His voice and his inflections are so memorable that it is difficult, once you’ve heard Mr. Sedaris read his own work, NOT to put his inflection into what you are reading. So I am completely entertained.

This post is one of the first that I posted on my blog when it was all shiny and new five years ago. It’s gotten lost under a small mound of writing since then, so by the magic of the writer, I deem it time to be resurrected and shared once again with my darling four readers. 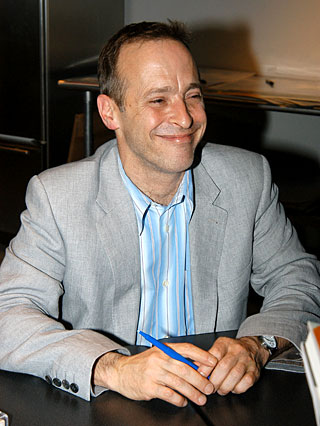 Sweat slips down my back, uncomfortably pooling in the dip in my lower back before slipping even further down to the crack that polite girls don’t really talk about.  I try to nonchalantly capture the sweat with my shirt at that dip just before its final decent.  Then I worry that a visible wet spot might be forming at the back of my shirt.  A quick glance around and I find other women glowing with the heat, but I don’t see any lower back shirt discolorations.  Was it only my back that decided to be an inopportune cooler at the moment?
Sufficed to say, it was fucking hot in here.

It was all the bodies collected together, purposefully, all of us pressing together so we could get a little closer, so we could hear what he was saying.

Two things: HE, was David Sedaris. And 2) the dip in my lower back is my favorite part of my body.

The place in question was Boise, Idaho.  A place you think to yourself, oh yeah, definitely a notable stop over for Sedaris on his recent tour to promote When You Are Engulfed in Flames.  Almost as important as say, New York, or Los Angeles.  Not only that, on said stop over, the signing event was being held at Hastings.

Hastings, for those who don’t know, is a music, book, video store.  I like to equate it to the K-mart of book stores. It’s okay, good bargains, clean store, just not the place you would think of setting up a rather well known author.

I arrived at Hastings early, but not early enough it seemed.  There was standing room only in an awkward space that normally consisted of a four table, nearly always empty cafe.  I wondered why no one thought ahead to folding chairs, a proper sound system, a small riser for the known short author to stand on. I thought about things along those lines, and couldn’t figure out why no one else had.

Being early, but not too early, I had time to stand around and watch as my body temperature built.

I gave up waiting in line for an autograph because part-time green shirt employees informed us that Mr. Sedaris would begin speaking soon, so it would behoove us to go find a spot to listen to the author speak.  They made this announcement five or six times over the loudspeaker.  The seventh and eighth time they made the announcement, was more like begging us to please get out of the line.

So I left the line and found another place to stand, in a seemingly well desired spot, which was actually very close to the table where Sedaris was signing autographs.  I could have gone over and stood next to him, and yet, polite Victorian rules passed down through Catholic school rooted my feet to the ground.

He was human, that was my first observation as I watched him with his fans.  His tie might not have matched the short sleeve checked shirt he wore.  Though, I wasn’t much of a Fashionista myself, so I wasn’t sure.  The third button on his plaid shirt was unbuttoned, and what I thought was amazing was that no one was telling him, no one had pointed it out.  I wondered if he had gone to lunch that way, or how long it had been unbuttoned and maybe that was what fame meant, you could walk around with the third button of your shirt undone and no one thought twice about it, or did it mean you didn’t have anyone who felt comfortable enough to tell you to button your shirt.  Maybe it was a sad commentary on fame, something about how everyone was too intimidated to tell him he had a button undone.

I made a mental note, to always travel with a close friend if I ever have to go on anything like a book tour, so I could be told if I had something stuck in my teeth or if I had a button undone.

David Sedaris was human.  Normal.  He was, IS, just like the rest of us.  Surely, there must have been a time when he had been a struggling writer, in some North Carolina town and had gone to the K-mart of book stores to hear an author he respected speak and he too had decided to not wait in the long line of drooling fans, just accepting that hearing the author was enough.  And I suspect, at some point, he realized that author he respected was human too.

I watched his fans next.  The gay boys who gushed their appreciation on him, ‘thank you so much for your strength and humor it’s helped me get through the hard times.’

The women with their canvas library bags that boasted various conferences they had attended in the 80’s.  (It is a strange phenomenon I’m still trying to get to the bottom of, why these women were all attending literacy conferences only in the 80’s.  Perhaps it was the female version of a mid-life crisis. Instead of buying flashy cars or new hair or trading in old spouses for new; these women decided to declare literacy their opus and hunted after it like they were chasing Vonnegut’s motorbike itself. Well, it’s one theory.)  So these women, with their canvas bags, I watched as they parked themselves in front of Mr. Sedaris and began a monologue of who the 9 books they pulled out of the bag were for and the long, boring story behind the well read books they pulled out after that.  It was a tiring few moments even for an observer.

There were the gracious fans, ‘Hello, if you could make it out to Jen, thank you so much. I look forward to reading your new book and hearing you speak.  Thank you.’ Quick, elegant, hassle free.

There were the well-manicured girls who giggled and told their friend on the other end of their cell phone they had been talking to the whole time, to hold on while they got ‘this guy’s autograph’.  I actually saw it, a Barbie put her friend on hold with a flippant announcement of, ‘no one you would know, hold on’ in reply to the obvious ‘whose autograph’ question, all the while Mr. Sedaris stared up at her, waiting.

It was finally time for him to take his place at the music stand and two microphones the staff had set up for him at the far end of the cafe.  The sound system wasn’t very good, he could yell and be heard just as well.  Mr. Sedaris realized the sound system was rather poor and asked, “can you all hear me okay?”

I cringed at the uncouth people behind me who all verbalized their inability to hear him with violently yelled “No’s!”  As if Mr. Sedaris were solely responsible for this problem.

He handled it with great aplomb, “well, this is the best I can do.”

He was gracious, funny, and diffused the situation with his well-developed speaking voice; of course I expected no less from a man I check in with on NPR at least once a month.

He chose a reading that revolved around homosexuality and recreational drug use. A subject that I thought perfect for today, for Boise, Idaho.  He read from an Esquire article he had written a while ago that had to do with fashion, or as he put it, ‘his lack of it’ and I thought oh that’s so apropos for the man I just caught with that button undone and the tie that may or may not have matched his plaid shirt.

In the growing heat we all strained to hear him, and I stood with a lavish grin on my face as I intently focused on his barely audible humor and the pictures he so eloquently painted.

After thirty minutes of reading, he began a question answer segment.  I could no longer pretend that I was the perfect audience member.  My untimely hot flashes, the sweat pooling in my ass crack would go un-ignored no longer.

I hated that my concentration was broken, so I took my moment of defeat to back away from the nasty heat-producing crowd and cool off.  I was outside the realm where I could hear his voice clearly, now it was just a mumbled mess.  I knew he was finished with the eruption of applause.  There was mass chaos as Hastings workers began herding the audience to form a new line so part two of the autograph session could begin.

I was going to go. I had done what I came here for, a bit of humanity from an author, a bit of inspiration and to be a part of something.  I moved against the crowd, with it, hell I didn’t know what the employees were trying to do any more than they did.

That’s when two girls closest to the autograph table caught my eye.  They both hoisted their purses up on their shoulders, loudly whispering and conspiring; then, suddenly, I watched as they reached into the unwatched gift basket presented to Mr. Sedaris, took an unopened bag of pretzels and stuffed the contraband into a purse. They manically giggled and grasped each other as they ran away.

I fought the crowd, walked out to my scooter and firmly fit my helmet into place with a grin while I pondered; what the hell were they going to do with the pretzels?  Brag that they had stolen pretzels from David Sedaris when he was at Hastings for his book tour?  Who does that, and what does that make you if you are a pretzel stealer from a man who can’t get anyone to point out that the third button on his shirt is undone?

I drove away with my dreams of grandeur scooting along side of me, laughing, those girls might have the pretzels, but I know who stole David Sedaris’ pretzels.