Hope is an interesting thing these days, isn’t it? I am stuck in a harsh wash cycle of hoping things work out and hoping I can fight the good fight for the long haul and hoping things will just somehow ‘work out’ over the next few years. The waxing, waning mess is akin to a gaggle of teenage hormones. Screaming and crying one minute; happy go lucky with a plan of action for their future the next.

(Side note: I have been debating sending that “short-fingered Vulgarian” a How To Be President For Dummies book. But that would require him having the ability to read more than 140 characters at one time, not to mention having the ability to read for comprehension. So maybe someone should start a daily tweet for the orange monster on how to be president, in bite sized pieces using kindergarten language.)

Interestingly enough, I haven’t had to look very far. In fact, inspiration and hope almost got me in an accident just around the corner from my home. Driving home, I glanced at this billboard, then glanced again, and I stopped driving, took my foot off the gas and went into instant auto pilot mode. What I saw was so simple and beautiful and hit my gut intensely. I turned around so I could take in the simple, bold, inspired billboard again. 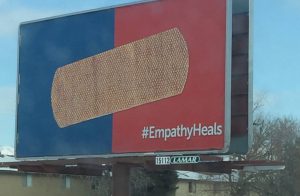 It turns out this image is the creative brainchild of students at a local school here in Boise called, One Stone. The students “used design thinking to tackle the challenge: How might we use creativity to inspire people to practice empathy post election season? Understand + empathize = make the world a better place.”

I checked out #empathyheals and found this explanation: “Empathy is the key to healing our nation and is going to dig us out of this ditch we have fallen in. There is a sort of stigma around the word empathy, people may say it’s “too emotional” or that they don’t need it. Whether you know it or not, empathy has resolved more situations than you might think. Empathy is defined as “the ability to understand and share the feelings of another.” Being able to connect with someone on more than a physical level is what makes us human. You may not agree with someone else’s opinions and views but empathy is respecting that they have different thoughts than you and, by trying to understand them, resolving things in a civil manner. Empathy is what creates a truly successful environment and unifies us.”

So after that billboard, I need to do something more actionable. Well, this Saturday, January 21, is the Women’s March. Have you heard about this? Yes, no, kinda? Here’s the mission statement from the Women’s March website, and I think it’s important to understand what they are about.

“The rhetoric of the past election cycle has insulted, demonized, and threatened many of us – immigrants of all statuses, Muslims and those of diverse religious faiths, people who identify as LGBTQIA, Native people, Black and Brown people, people with disabilities, survivors of sexual assault – and our comminutes are hurting and scared. We are confronted with the question of how to move forward in the face of national and international concern and fear.

In the spirit of democracy and honoring the champions of human rights, dignity, and justice who have come before us, we join in diversity to show our presence in numbers too great to ignore. The Women’s March on Washington will send a bold message to our new government on their first day in office, and to the world that women’s rights are human rights. We stand together, recognizing that defending the most marginalized among us is defending all of us.

We support the advocacy and resistance movements that reflect our multiple and intersecting identities. We call on all defenders of human rights to join us. This march is the first step towards unifying our communities, grounded in new relationships, to create change from the grassroots level up. We will not rest until women have parity and equity at all levels of leadership in society. We work peacefully while recognizing there is no true peace without justice and equity for all.”

There are so many different marches happening all over the nation. All around the world really. My sister just told me about one that will be happening in Rome. I was a bit depressed, I wanted to take part in a march. To be part of something like this. I thought I had missed my opportunity when I found out we had a Unity March here that was under the Women’s March umbrella.

It’s a bit more than cool. When I started following the links and information, I found out that there was more to this march in my little corner of the world. It has been the brainchild of two high school students who held a unity rally the moment after the election because they felt the need to do something.

“Nora Harren and Colette Raptosh, bereft after the loss of their presidential pick, Hillary Clinton, decided to do something to bring together people who felt dejected or disenfranchised by the outcome.

Texting each other near midnight after the election, they set upon holding a unity rally on the Capitol steps that weekend. With just a couple of days of planning and publicity, the event drew nearly 500 people.”

These two young women, their drive, their belief in this country, their hope in their future and their willingness to DO Something about it, moved me to tears. Not even able to vote yet, these women who are studying for tests and going through all the normal high school rituals, are inspirations.

They started a go fund me page to pay for the event. The girls were trying to raise $3500. “The Women’s March on Idaho is an event that stands in solidarity with the Women’s March on Washington. It is put on by People For Unity, an organization lead by students in Boise Idaho. Funds will be put toward: speaker equipment, advertising and other actual expenses. Extra money will be donated to the Women and Children Alliance.”

They raised the money needed and then some.

I’m so proud to go stand with women across the nation and to stand with the future voices of our country. If you are in Boise and would like to go, please join. The rally is nonpartisan Women’s March and is “about inspiring and honoring those who champion human rights, dignity, diversity and justice,” Raptosh said.

Hope…Maybe it’s okay to embrace a bit of it.

Do no harm my friends, but take no shit. 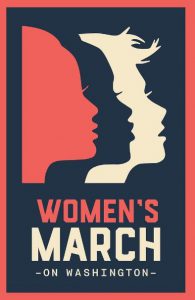