A few things. I took Latin in High School. I did it because no other language interested me. Spanish so I could actually communicate with another human being that is alive today? No thanks, give me the dead language please. Honestly, I took Latin because it called to me, because they didn’t offer Italian at school and it was as close as I could get. I also took it because there was so much history that went with the class. As a person who has a degree in History (emphasis on Antiquities, Greeks and Romans) I loved Latin class.

It was there that I first learned what the phrase across the top of the MGM Lion Symbol, Ars Gratia Artis: Art for the sake of Art. 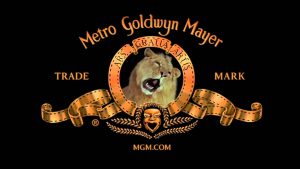 I forget that sometimes, that when all is said and done, at the heart of all this madness that I attempt daily, its art. That art should be for its own sake or else it’s lost. And that at the end of the day, it should be fun.

I have often lamented my inability to draw something coherent on a piece of paper. No one wants me on their Pictionary Team. My painting is done in Black Times New Roman on a blank screen.

I do admire the artist though. My writer’s den is filled with art that has spoken to me over the years. I love to support local artist. I love that when I go to a gallery with my husband we get into the great debate over the dot of red paint on a white canvas and how that is art.

In my magazine writing life, I tend to bend toward the stories about artists. I love to have a reason to talk to them and glimpse their lives and what their process is like. Hell, I admire them.

My little corner of the world makes a strange home. We’re landlocked and in essence, we’re landlocked from the northwest as well. From weird Portland and rainy Seattle. Still, we’re influenced by them and part of the Great Northwest. But the distance from those cities has given us an edge, a way to create our own rhythm in this high desert town surrounded by foothills.

One of the ways I’ve seen this is through the cities commitment and support of the local artist.

My favorite gallery in Boise is open 24/7. It’s the largest mural gallery in the Northwest. You see, over the past few years a section of one of our downtown alleys has become known as Freak Alley. What was most likely was considered ‘graffiti’ when it began, has found an expression among the newest form of art, street art. “Unsanctioned artwork executed outside of the context of traditional art venues.” 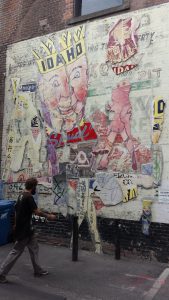 In 2002, artist Colby Akers was painting on the alley door of Moon’s Kitchen café. An employee asked him to sign his work when he was done. That was the beginning of Freak Alley. It’s grown since then. The outdoor gallery has an indoor space now. What I loved the most about the website when I found it was that if you want to support the gallery but don’t have the money, you can donate your cans to them. Nice. 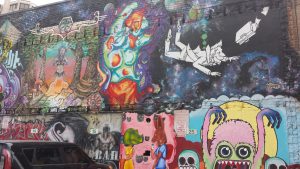 This past month, artists were back in Freak Alley adding to the art, updating old works, and creating new work over the old. Nothing gold can stay, huh? 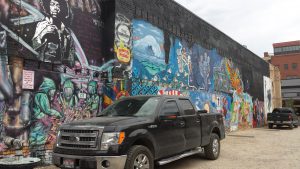 I’m not sure how others feel about Freak Alley, but I love it. I love taking my kid through it to open a dialogue about art at an early age. I love watching some people frown as they walk past and others linger as if there is something speaking to their soul. Because isn’t that the heart of art for the sake of art? 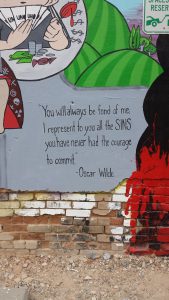