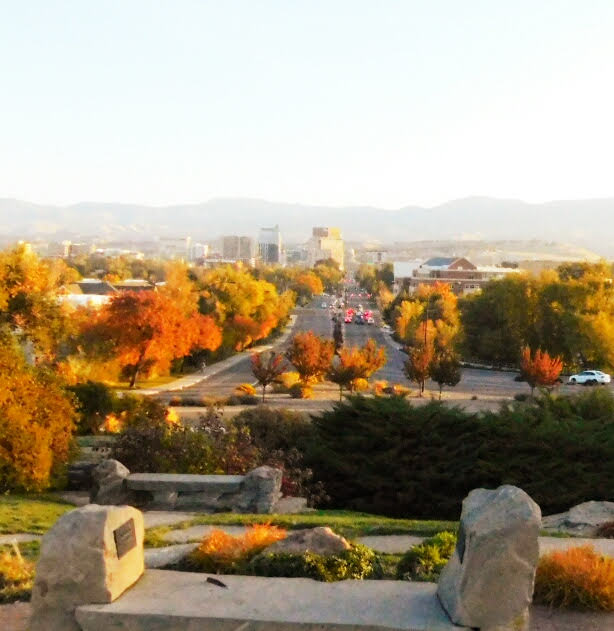 The temperatures have dropped in my little corner of the world. The leaves laugh at me as I try to gather them for compost. Those still left in the trees, that is. They wait for a clean canvas of green and swirl, twirl their way from the branch to the ground. Another build-up of work to be done.

The colors draw my eye, invite me to stare and contemplate the day away. The sun, it seems, is more playful with the shadows this time of year. Or perhaps I’m heightened in my awareness of the lively shades that dare me to daydream the day away.

The light is more auburn, gold, red. Depending on the time of day. It arcs across the sky, drifting like the leaves, to dip the horizon. To give us more darkness and cool weather, to temp us to more hours of snuggling with books, blankets, conversation, each other.

The rain will come and change the sound of crunching leaves to an earthy squelching; still inviting, delightful, for children to romp among. Full gray clouds will enhance the light and seasonal sunset of leaves on the ground. Brighten the reds, set a flame to the golds.

Oh my friends, it’s this spirit of autumn and earth and light that has me thinking literary thoughts. Quotable thoughts, if you will.

An array of colorful fall quotes 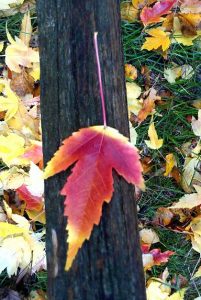 “Her pleasure in the walk must arise from the exercise and the day, from the view of the last smiles of the year upon the tawny leaves and withered hedges, and from repeating to herself some few of the thousand poetical descriptions extant of autumn–that season of peculiar and inexhaustible influence on the mind of taste and tenderness–that season which has drawn from every poet worthy of being read some attempt at description, or some lines of feeling.” – Jane Austen

“That country where it is always turning late in the year. That country where the hills are fog and the rivers are mist; where noons go quickly, dusks and twilights linger, and midnights stay. That country composed in the main of cellars, sub-cellars, coal-bins, closets, attics, and pantries faced away from the sun. That country whose people are autumn people, thinking only autumn thoughts. Whose people passing at night on the empty walks sound like rain.” – Ray Bradbury

“I’m so glad I live in a world where there are Octobers.”L.M. Montgomery

“At no other time (than autumn) does the earth let itself be inhaled in one smell, the ripe earth; in a smell that is in no way inferior to the smell of the sea, bitter where it borders on taste, and more honeysweet where you feel it touching the first sounds. Containing depth within itself, darkness, something of the grave almost.” – Rainer Maria Rilke

“The heat of autumn / is different from the heat of summer / One ripens apples, the other turns them to cider,” – Jane Hirshfield

“It looked like the world was covered in a cobbler crust of brown sugar and cinnamon,” -Sarah Addison Allen

“He found himself wondering at times, especially in the autumn, about the wild lands, and strange visions of mountains that he had never seen came into his dreams.” – J. R. R. Tolkien

“Every leaf speaks bliss to me / Fluttering from the autumn tree.” Emily Bronte

“The aspen covered hills are now a giant cross-stitch of glorious colors.  Reds, oranges, yellows, all shades of the autumn kaleidoscope are present.” – Nicole Sharp 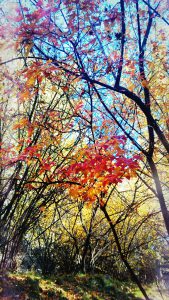 Why do we call it Fall?

This time of year, the months between summer and winter, weren’t always called ‘Fall’. They were actually referred to as “Harvest” back in the olden days. (The olden days being 1300s England.)

“Harvest” was a slightly confusing term because there were two ‘harvests’. One when you actually, physically, harvested the crops and the other was the general time of year the ‘harvest’ was supposed to happen.

Then, an old latin word rode in like a Rock Star: autumnus. Ohhh, the folks liked that and “Autumn” made its way into the language in England in the 1300s.

By the 1600s the poets were all swoony over the falling leaves and loves and their odes. Even though they still liked to refer to the harvest season as Autumn, they threw in a hefty reference to the “Fall.”

Then, a handful of folks moved to America and united the states and preferred to call the season “Fall” rather than “Autumn”. It seems no one knows the exact reasons why “Fall flourished in the United States…but by the mid-1800s, fall was considered to be entirely American by American lexicographers.”

Who decided Black and Orange?

Many, if not most, of the traditions we celebrate when it comes to Halloween have roots in an  ancient Celtic harvest festival called  Samhaim (“sow-win”). Even the  evolution of a Halloween color scheme, Black and orange , has beginnings here.

Samhaim was the Celtic New Year, celebrated from October 31 to November 1. A time to “welcome the harvest and usher in “the dark half of the year.”

October 31 was also a night when the veil between the earthly realm and that of the dead was thin. So, in order to ward off evil spirits, you did a few things. One, light a huge bonfire and two, hide your true identity by wearing a costume. Ghosts being gullible to a costume wearer, “Oh, I do apologize, you aren’t the earthly being I am meant to haunt this night. Carry on.”

Ways to ward off evil spirits are found in so many cultures. It’s the reason the Hawaiian Tiki often has threatening faces.  And why evil looking Gargoyles perched themselves on building edges, all to keep evil spirits away.

Another aspect that came along to this bonfire celebration was the act of wearing all black. A sign of mourning to remember those we’ve lost. Black=a symbol for death and darkness. And this time of year, when the days grow shorter and the nights grow longer, was (and still is) a time of year when we are faced with our mortality.

Why was Orange the natural pairing with Black? Well, for one thing it was a popular color at this time: Orange leaves, orange pumpkins. Symbolically, the color orange “combines the energy of red and the happiness of yellow. It is associated with joy, sunshine…To the human eye, orange is a very hot color, so it gives the sensation of heat… Orange is the color of fall and harvest. In heraldry, orange is symbolic of strength and endurance.”

It stands to reason that at this time of the year when darkness is the proprietor in ones’ life, the strength and sunshine of the Orange color seems a necessary pairing.

The True Colors of leaves 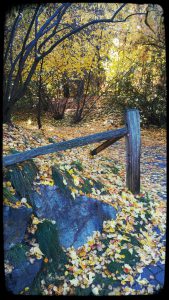 Leaves aren’t actually green. I mean, they are, but they aren’t. Did you know, in the spring and summer, leaves need nourishment from the sun, which is called chlorophyll. That’s what causes the leaves green colors. “In autumn, when colder, shorter days arrive, many kinds of trees no longer make food energy with their leaves and, consequently, no longer need the green pigment.” And the leaves are free to show their true colors. There’s a bit more science to it if you’re interested.

How did Trick or Treating start?

Asking for treats during Halloween came from Ireland.

Okay, the pagans had Samhaim in place as the harvest celebration. Well, Christianity came to town and to make the whole thing an easy transition, they kept most of the pagan holidays, slapped on a coat of paint, tweaked a few of the standing traditions and ta-da – easy assimilation.

(Before you’re offended, let’s both take a moment to look at that last paragraph and agree that my history degree really paid off there when it comes to explanation of highly involved subject matter!) {And if you had a pang of offensiveness ring through your bones…well, let’s look at history together really quick. “Pagan traditions and celebrations preceded the onset of Christianity. Arising spontaneously in the ancient world, holidays and feasts developed in Syria and Egypt, Persia and Mesopotamia, in Gaul and the dark woods of present day Germany, and in the Roman Empire. The Norse of Scandinavia, the Druids in England and Ireland, the indigenous peoples of the Americas, all celebrated holidays throughout the year. Despite the lack of communications all of these celebrations shared something in common. They all followed the sun. Festivals, feasts, and celebrations, centered round the winter and summer solstices, appeared in all pagan civilizations centuries before the birth of Jesus of Nazareth.”}

Now that that’s out of the way, back to trick or treating.

Asking for treats during the celebration of Halloween is thought to be derived from the tradition of “Mumming” in England and Ireland. People in costume would go door to door in the middle ages and sing or perform short plays in exchange for food or drink.

Mix this with the belief that the veil between worlds on Halloween is thin and you’ve got souls of the dead roaming the earth in need of being appeased.  Flash forward a bit, and Christian missionaries replace Samhaim with religious-themed holidays like All Saints’ Day, All Hallows’ Eve, and All Souls Day. Give all this a few years to steep, allow a few of the old customs to rise to the top once again and introduce waves of European immigrants moving into the US and you’ve got the beginnings of trick or treating.

However, the first time “trick or treat” was mentioned in print was in Blackie, Alberta (Canada) in 1927. 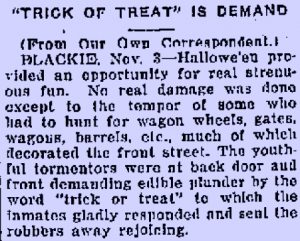 “Trick of Treat” is Demand

Blackie, Nov. 3 – Hallowe’en provided an opportunity for real strenuous fun. No real damage was done except to the temper of some who had to hunt for wagon wheels, gates, wagons, barrels, etc., much of which decorated the front street. Though youthful tormentors were at back door and front demanding edible plunder by the word “trick or treat” to which the inmates gladly responded and set the robbers away rejoicing.”

“Although it is unknown precisely where and when the phrase “trick or treat” was coined, the custom had been firmly established in American popular culture by 1951.”

Write a Novel in month?! 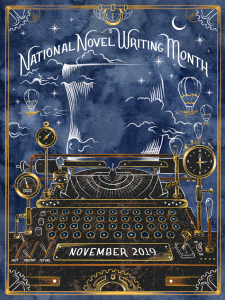 National Novel Writing Month, or NaNoWriMo, kicks off Nov. 1. Participants will attempt to write 50,000 words between Nov. 1 and 30. *I’ve got a lot more to say on this topic my friends. I’ll keep you posted.

According to the UK Department of education and the University of Chicago, “Children born in the fall are statistically better students and live longer.” So if you celebrate a fall birthday, congratulations.

*insert Charlie Brown looking disappointment on my face here: I was born in January.

There are roughly 80 products for sale this fall all bearing the Pumpkin Spice flavor. Even local mechanics in my neck of the woods aren’t being left out and have signs promoting their pumpkin spice brake pads and oil changes.

But did you know, Pumpkin spice has nothing to do with pumpkins?

“Pumpkin spice” is the spice mix used IN pumpkin pies. Though, i understand if you still like it and since you’ve read this far and are being so polite, I have a gift for you. A recipe for Pumpkin Spice and a link to a gal who has a few ideas of what you can do with the spice.

*Note: Pumpkin Spice Spam was a joke in 2017, but has become a reality this year. They are not selling it in stores, it must be purchased online.

Wherever your harvest adventures take you my friend, enjoy the season!