Italy is the culmination of my heritage, my dream life, my hard work of learning another language (and the shock that I could learn another language), and a wonderful emotional attachment to food in that country.

*Side Note: If you haven’t seen it yet, find a way to watch Stanley Tucci: Searching For Italy. He travels Italy and eats amazing food. Enough said.

The day will come when I can once again head to Italy. In the meantime, I read books with flowery Italian descriptions, I write my own books that take place in Italy, I look out my front window on a rainy autumn morning and I dream of Italy…

Here is a dreamy segment from one of the books I’m working on called The Italian Holiday. 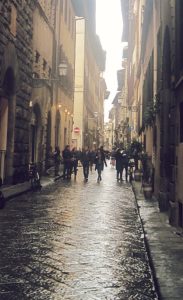 My feet hurt and my stomach was growling hunger after a long morning of exploring the February streets of Florence, but I didn’t care. The weather was cool, no more rain, just cool humidity, my sister said it was lingering winter weather for Florentine’s; but coming from a snow packed Idaho, the weather felt happily mild.

I walked slowly all morning, methodically. My eyes overwhelmed after the first few minutes. So much eye candy it was hard to concentrate and really take in everything I was seeing: Terracotta rooftops, intricate details carved into the stone of sleepy buildings. Ratty green canopy covered outdoor markets where vendors set out a rainbow of fruits and vegetables. Vibrant pomodori, dark green peperoni, royal purple melanzana. 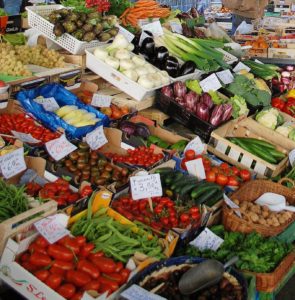 My feet stumbled several times on worn cobblestones, not used to walking on such ancient surface. Hell, I was even intrigued by the buildup of dirt on the peachy yellow facades of the buildings.

It was foreignness in the simplest of forms that got to me. The way everyone took public transportation. The way shopping was done in small bouts several times a week because most people walked to the local fruit vendors and bread stores and small grocery stores without the convenience of a car to carry all their goods home.

Most people pulled a collapsible wheeled basket loaded down with their purchases behind them. Visiting was done at lunch time, not over coffee. Coffee was for quick bouts of gossip; lunch was for languishing. 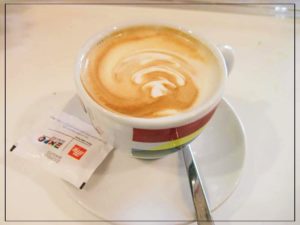 The heart of Florence was built by the Renaissance. The Renaissance birthed the structures that still stood as monuments to its glory. The Renaissance renewed philosophy and science. And those building blocks had become a tourist destination. Some scholars call the city a relic. The place that once teemed with artisans who created and produced, was now a faded tourist trap, producing worn out baubles and gelato.

I disagree. This city still sings with life. Inspiration radiates from the foundation. I found myself inspired by the specks of dirt that had become grout in between the well-worn cobble stones. And even though DaVinci and Michelangelo were long gone; the city still held the breath of the life they lived. It swirled around the Piazze and Vialle. It haunted Santa Croce and the Duomo. 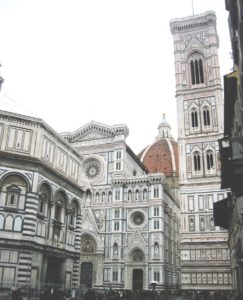 I stood in front of the Duomo and brushed away a stray tear. I stood here with my family three years ago, before Marie had found the study abroad program that would bring her here. Three years ago I stood in front of this structure and explained the history. The sacrifices, the massive amounts of time and effort and man power it took to build the cathedral. Three years ago I was still stunned that the Italian people began building the structure before they even had the engineering know-how to finish the dome of the church. They just trusted that one day, someone would come along and figure it out.

I studied the green, white and gray edifice as part of a history lesson then. But this time, without the overwhelming number of tourists, with time to contemplate her beauty on my own, the Duomo was begging to be written about, to be immortalized for another century.

I hadn’t planned on going inside, but there was no line to get in, so in I went; into the cool, dimly lit womb of the Duomo. Hushed echoes from the handful of tourists swirled around me. I gave way to fanciful idea that among the echoes, if I listened carefully, I might be able to hear something of the past. It was foolishness, but I was a writer and given to foolishness. Especially when I was alone.

I sat in a pew and scribbled a few ideas, impressions. No one seemed to care about the space I was taking up on this Tuesday in February.

Before I left, I lit a candle for the great writers, artists, thinkers and philosophers that once roamed these streets and made this city great. I felt bad that I didn’t have a few coins to drop in the collection, but promised myself that when Marie got paid, I would return. 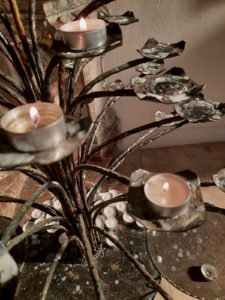 Out of the church, I floated down the street in a dreamlike trance. Ignoring the vendors trying to convince me in broken English that the scarf, purse, and leather jacket they held aloft was just for me, “perfect fit for a pretty lady.”

I walked past a woman who was holding a small book eye level and I didn’t think much of it, until I glanced over her shoulder. I was stuck by the sketch she was doing of the Piazza Repubblica. Just pencil on a blank page of a small little sketchbook. She had done the archway, the Triumphant Arch and the outline of the statue that stands atop a column, the Column of Abundance. 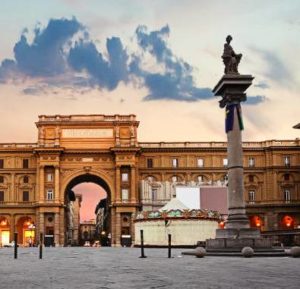 I tripped over my feet and stopped. I wanted more than anything to turn back and strike up a conversation and watch her create. But the moment didn’t belong to me, it was hers. Sure, I would steal it and write about it, but I wouldn’t intrude.

I’ve watched plenty of people sketching and painting in this city, but watching someone who was struck by a moment and who just had to capture it, well that’s the epitome of what this city stood for, wasn’t it? 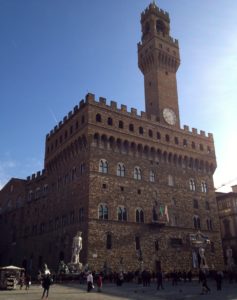 My feet led me to the Piazza della Signoria, across from the Uffizi museum. Uffizi is Italian for office, and those offices once held the Medici family. Today their bargaining house hold’s Botticelli’s Birth of Venus and Carravagio’s Medusa.

I wander the courtyard in front of the Uffizi that leads to the Arno River, the lifeblood of Florence. The courtyard is filled with pillars topped with sculptures of the most influential men of the Renaissance. It’s more like a gallery of the who’s who from that enlightened time.

I stop for several seconds and drop off a sort of prayer at the foot of the statue of Boccaccio. Dante is there too, but I feel more of a kinship with Boccaccio. I’ve heard him referred to as the patron saint of the Florentine writer, so what would it hurt to invoke his inspiration? 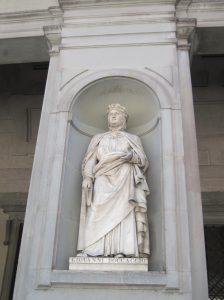 A musician is playing his guitar in the gray corridor of the Ufizzi for the few tourists that loiter. He’s not the best, but he’s weaving a spell, and as his music bounces off the walls and encircles me, I’m ensnared.

I think it would be nice to go into the Uffizi, but as it requires an entrance fee, I opted instead for the steps of the sculpture garden just beside the Uffizi. I want to write more than I want to see the Arno River at the moment. The river will wait, my inspiration begs for my attention. 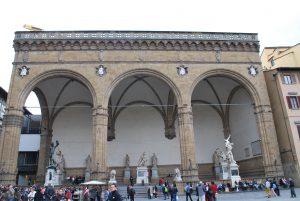 I sat inside the covered area, next to Giambologna’s sculpture. I don’t know much of the man, but I know he sculpted this work first and then gave it a name at a later date. The name: The Rape of the Sabine Women. 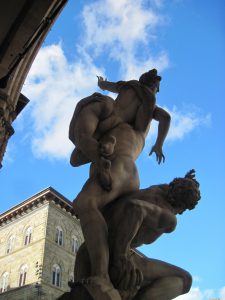 Once I settle with my notebook and pen, I write wildly. I am moved and happy for it. A few tears form and I wipe them away, not caring if anyone sees. “Who says you need money to experience Florence?” I whispered to myself.

I imagine the world before me as it must have been a few hundred years prior. The cobblestone bricks that hold up my weary tourist feet, I’m wearing them down just as Florentines before me did. Just as Michelangelo, Dante, and Galileo helped to do when they walked these streets. I imagine the Medici’s at work in the Uffizi, long before it was a museum for great works of art. I imagine the local people at the height of the Renaissance going about their business, buying bread, meat and vegetables from local vendors in the city center. They carry with them the news and gossip, the two bleeding into each other.

There is comfort in the idea that I am not the first hopeful artist who has walked these streets or sat on these steps and I won’t be the last. But I add my words and tears, mix them into the dust and I am a molecule added to a greater moment.