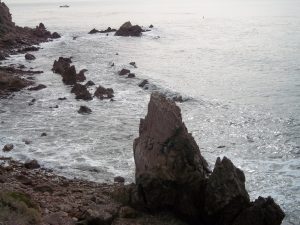 Okay, I’m typically late to most parties. Examples: I was born a month late. I was in college for eight years (no, I don’t have a masters in anything). I didn’t take drivers-ed with all my friends, I waited for six months to cross that one off the bucket list. First kiss was junior year of High School. Got married at 34.

This goes for trending stuff too. Like TV shows, books, movies…though, to be fair, we don’t have real TV which means we don’t have commercials. So there is an element of consumerism I’m not privy, but I can’t say I miss it.

Geez, Nicole, what are you going on about?

Okay, I’ll tell you. Maybe this isn’t news to you, or maybe it is. Either way.

Good lord in heaven, I’m gushingly over the moon about Poldark here.

Poldark is a series of books written by Winston Graham that has been turned into a new show for the BBC and aired in the States on PBS Masterpiece Theater.

I’ve been sick this past week and yesterday I had the leisure to binge watch the first season of Poldark. I started the first show with a bit of skepticism, but I was quickly hooked.

It’s Outlander meets Jane Austen with a hint of Downton Abbey and a splash of Wuthering Heights. There is so much brooding on cliffs as the wind whips hair into tangled messes and the music swells. So many looks of longing upon the sea I could almost smell the salt in the air.

(But let’s be honest, it wouldn’t be a proper British show without desperately quiet looks of longing, would it? (Here’s a side note in a side note. I’m reminded of the bit Eddie Izzard does on the difference between British Films and American films. The gist being, that in one county, it is difficult to eat popcorn for all the long quiet pauses. Mr. Izzard, my favorite comedian.))

I was a fan of Downton Abbey and I have a great love for all things Jane Austen. (Looking for Christmas Ideas for Nicole: Jane Austen action figure. Just saying.) I read the Outlander books when I was in college and missed several classes because I couldn’t bear to tear myself away from the pages. Though that isn’t why it took me eight years to graduate. That’s another discussion for another day. When I first learned that they had made the show based on the Outlander books, I was really skeptical then. But the moment that the heroine was helped onto the back of a horse where her Highlander wrapped her in his plaid…it was every romance novel I’d ever read come to life and I was enchanted.

Poldark is filling the void left by Downton Abbey and the hiatus between seasons of Outlander. Well, that’s half of why I’m so entranced. I could almost taste the sea salt on my lips after each episode of Poldark. So much so, that I took out my tattered copy of Persuasion and Wuthering Heights.

To feed my need for instant gratification, I devoured the poem The White Cliffs of Dover by Alice Duer Miller.

“I have loved England, dearly and deeply,
Since that first morning, shining and pure,
The white cliffs of Dover I saw rising steeply
Out of the sea that once made her secure.
I had no thought then of husband or lover,
I was a traveler, the guest of a week;
Yet when they pointed ‘the white cliffs of Dover’,
Startled I found there were tears on my cheek.”

Though, the cliffs of Dover are on the opposite side of the continent from Cornwall, where the Poldark series takes place. Watching all the glorious, scenic moments of crashing waves upon shores, I was reminded of the first time I saw the majestic white cliffs from the bow of a ferry-boat and I too found myself in tears.

I implore my Public Library to hasten the arrival of the first book in the Poldark Series by Winston Graham that I put on hold. I was intrigued enough to read what pages I could on Amazon. And if I feel like I could go in public without coughing up strange parts of my lung for at least five minutes, I’ll head over to the bookstore and buy it to soothe my need for the gratification of holding the book in my hands and lovingly running my eyes over the words.

The romance of the Poldark story is snuggling next to me, embedding itself, and I am glad for the company. I’m intrigued as a writer, wondering what this influence will do to the upcoming book that is simmering for the month of November. I’m obsessed, feeling like my teenage self, awash in sighs and first kisses and ‘I love you’s’.

And perhaps it’s the Mucinex, the snot filling my head, or the all-around rough way I’m feeling, but I cried at least once during each episode. (Then again, as my dad has so eloquently put it in the past, I have a tendency to cry at action packed commercials.)

If you’ll excuse me, season 2 beckons.