Birthdays are interesting things aren’t they? There is a joy in the celebration of self. It’s like a personal New Year with pampering at the forefront. Although, some people don’t like to celebrate them. Some never really celebrated to begin with, so they just give a nod of acknowledgment to the passing day. Of course, in my family, mom made it a big deal. I’m not talking themed birthday parties every year (although she did do that on occasion.) I’m talking – short of a parade – my mom had a way of making our birthday’s so special, we could hear the band in our head coming round the corner.

Okay, so I’m talking about birthday’s because the writer had a birthday. She is of a certain age now. I don’t mind telling you how old she is; it doesn’t faze her really. I’m 45.

The writer has felt two things the past few years, she has felt about eighty-five, as if there is nothing left in her life. Yet, at the same time, she feels very much like Margaret Atwood: “I believe that everyone else my age is an adult whereas I am mere in disguise.”

I have found, the past two years, my birthdays have been pushed and pulled in an aggravatingly wonderful sort of yin/yang. My mortality and life’s work have been unavoidably front and center in my face.

So here is the push and pull this year. I recently read these two quotes:

Our work is who we are in the world.

(That phrase rocked me a bit, so much so, that I jotted it down, and as I was reading three books simultaneously and researching on the inter-webs … I don’t know where I read it. The source will remain unknown until I figure it out.)

This is your reminder that every word you write is a drop of water that becomes the iceberg that will lift you out of the morass and toward your goal. No word is wasted. Short stories that don’t sell, books that you trunk, plots you sketch and abandon. Every word has value.

These were both timely quotes. Because you see, as each year ticks by, sure my personal repertoire of words written increases in size and breadth. If my words alone needed a room, they would be pebbles bursting open doors because there was just so damn many of them and not enough room for all of us to live in this house together. Yet even though my work grows, my number of publications isn’t what I would like that to be.

Insert a dash of humanity here, and on a birthday, which I treat as a personal New Year, I tend to throw a pity party with the theme “I haven’t accomplished much of anything.” I hand out party hats so we can wallow in the fact that this is the mid-point and a different life was envisioned, not this one.

But I’m not one to linger at such a party, even if I did plan the whole thing and the decorations were amazingly on point this year and the cake was to die for…I stomp that party hat under foot; fuck that noise!

It took me a long time to tell people – definitively. Loudly! Positively. That I, Nicole Sharp, am a WRITER. That’s what I do. I vacillated for many years between admitting I was a writer and declaring I don’t do “anything” because there were no tangible books for me to hand out just yet. There is no mass amount of write-ups about my work. There are no readings, interviews or up-coming events with my picture pasted on a billboard to point to.

But still, I spend three to eight hours a day writing. So, if our work is who we are in the world and not one word I’ve written has been wasted…well shit. New party theme!

My three faithful fans are probably wondering what they can get me for my birthday. Well, this year, I’ll make it very easy. I’ll give you my wish list. Not only my wish list for my birthday but for Valentine’s Day, President’s Day, Ground Hog Day, 4th of July, my friend Amy’s birthday, my anniversary, my kid’s birthday, next Halloween, Thanksgiving and Christmas.

I want you to read my words and tell other’s I exist. Pass along my words to those others. Re-read past blog entries you’ve been meaning to read. And if my writing so far isn’t your cup of tea, go read others work. Support your local writers who are so in love with words and the world they feel they have something to share with you.

This year is going to bring about big change in my writing world, I’ve got an energy and new ideas that are already bringing about awesome success.

SIDE NOTE: Now, if you are like me and you read some floppy quote that insists Our work is who we are in this world. And if it makes your insides curl and you think, like I did, then I’m not much of anything. I also say give it a day or two. Rewrite your own life the way my grandmother used to rewrite my life.

You aren’t volunteering to work for Idaho Fish and Game for two weeks in the back country. You are the head moose wrangler for the Idaho Fish and Game. Tagging, testing, counting, doing surgical procedures, you know, doing very important work! (Note: she really did rewrite my life that way once.)

Flip the way you see the world, and the world sees you, and you’ll find you aren’t just a mother, sister, wife and daughter. You are a head chef at Casa Tua. You are the secretary from hell who can reorganize a monthly calendar in two minutes and hand it out to all involved re-collated and laminated. You are a multi-tasker who is so inspirational, somewhere in Hollywood right now, someone is pitching the reality TV show based on your abilities. Your smile alone and the two seconds of pure time you take to make eye contact with a barista today and genuinely tell them thank you…well, that can change the world.

Perspective my friends. I know there is a tendency to slouch toward the negative, but as it’s my damn birthday, I choose to see the powerful side of each of us. And as my party favor to you, I demand you take a minute and accept the power I see in you as well! 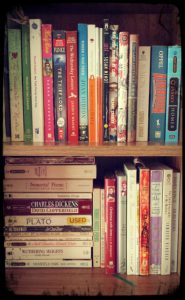