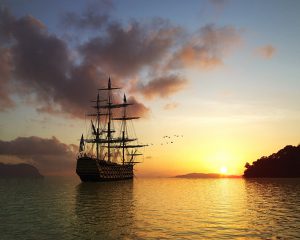 I’ve been dreaming of ships and stars again. When I have time to dream that is. The dog or the kid wake me up almost every night. Somewhere between 2am and 4 and there seems to be a silent agreement between the two of them as to who gets to wake me up.

I’m not fond of waking up in the middle of the night, but this is just a phase, it will soon end and be replaced by another ‘thing’ that happens every day for a few months. For now, it would seem, this is my sleep schedule.

It’s not all bad.

Sometimes, in my exhausted wakening’s, the ideas of ships and stars linger and I slip into a sweet moment when my tiredness is put on hold and words dance through the veil and I write some fanciful, mindless ramblings down in my notebook in the darkness.

I write about another life I’ve lived between the space of awake and asleep. A time when we wrote in the darkness by the light of the stars. By the light of our hopes. As we floated across glass waters we wrote our dreams into a void by the first blush of dawn. Eyes heavy with fatigue, souls weighted with dreams; we soothed ourselves by the familiar movements of hand to pen, and pen to page. And such words written in the dark become a catharsis, a confession, a jumble of madness. 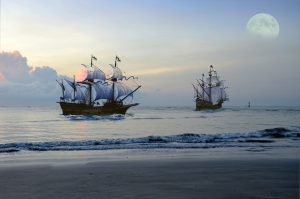 II love the metaphor of a ship and the sea and the hundreds of thousands of ways it’s been written and described and philosophized. I sigh over pictures of a ship, sails filled with wind, heading toward the horizon. I’ve been searching for a quote I read in a book, a hundred years ago, where a character’s personality is likened to the mast of a ship. The wood used for a mast being strong and sturdy and prized. I wrote a short story because I was inspired by the poem Ithaka by C.P. Cavafy. He describes sailing toward Ithaka in a captivating manner. I sometimes wonder if I was a sailor before the world told me who I should be.

I have also been known to write some desperately trite poetry revolving around ships and sailors. I think I’ll share one with you. Now, don’t get me wrong, I adore this poem. I just have too much respect for poets to call myself one. Writer I can handle, poet…I’m content to dabble, and satisfied to bring attention to the greats.

the wind is a memory we longingly evoke

Hope is an indulgence we dare not recall.

Death, a pleasant prospect to this harsh reality.

we freely choose this torrid adventure.

Off the stern of the ship

The gods trick our senses.

Relief will not be found this night. 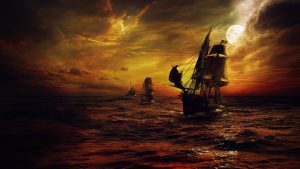