If you’ve been to a movie theater lately you’ve seen the poster for it. If you are prone to watching commercials you may have been privy to it. If you are a fan like me, you may have watched the trailer and laughed all the way through it with a feeling of “what the hell” which mixed strangely with an appreciative “this isn’t right but it’s awesome.” 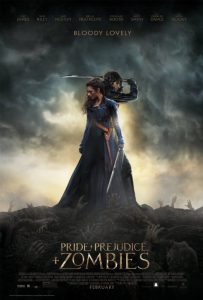 Pride and Prejudice and Zombies, the movie, opened on the 5th of February. I haven’t seen it yet, but I’ve heard the buzz from fans of Jane, fans of zombies, and movie critics. It’s a mixed bag.

I’ll probably see the movie, no matter what folks are saying.

I’ll most likely see it. I mean, I like zombie stuff and I love Jane Austen and this book might have been one of the first literary zombie book mashups. Don’t quote me on that, but I remember seeing the book years ago and laughing happily at the idea.

My thoughts have turned to this, though. What would Ms. Austen think about all this? Would she reside in the camp that imitation is the sincerest form of flattery? Would she laugh or would she bristle at the whole idea? I’ve always thought that Ms. Austen, her character, might be seen in shades of Emma and Elizabeth Bennet. Surely someone with those characteristics would wave a dismissing hand at the newest in a long list of imitative movies and laugh.

It is sincerely amazing the amount of remakes and spin offs there have been of Pride and Prejudice. This Zombie one isn’t the first and it won’t be the last. So should the question then become, not what would Ms. Austen think, but rather, after all this time, what is it that propels the popularity of these books and their story lines? There must be something in her commentary on the human spirit, the human condition, society and expectations of women that were so profound and at the same time so simply accessible that they still continue to hold water and attraction.

I was looking through the interwebs for a list of Jane Austen spin offs and there are so many that I narrowed it down to Pride and Prejudice spin offs, and still the lists go on and on.

While I don’t know if Ms. Austen would be flattered or offended and I need to write more of an in-depth research paper on the reasons her work continues to delight and ring true, I do know this. Fiction writing is awesome. Taking stories we know well and reinventing them, delivering them to a new generation or simply in a way that’s all our own, constructing the spinoff is a testament to creativity, don’t you think?

A last note on this whole spinoff-ness. I found something that’s new to me. Another spin on Pride and Prejudice that mixes that time old tale with newer media format. The vlog. A Youtube series called The Lizzy Bennet Diaries. In one word: Awesome.

Check it out if you get a chance.